Mark Steevens provided this splendid tithe map. Tithe maps give ownership data for the whole village; unfortunately, we don’t have that, but the map itself is very beautiful. The history of tithe maps is explained here. Thank you very much, Mark. The copy here has been pasted together from a number of digital images and pulled and pushed to make it all fit, so it’s not a great piece of geography, but it does show the houses that were present and even most of the trees.

The tithe map seems to be a marked-up version of a generic parish map. The label says “Standidge & Co Litho, 77 Cornhill, London. 1838”.
Click for a much, much bigger version! 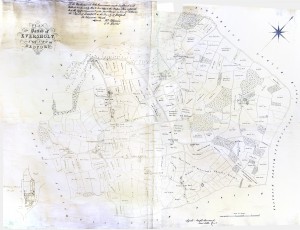 Here is a detail from that map showing the area around the church. 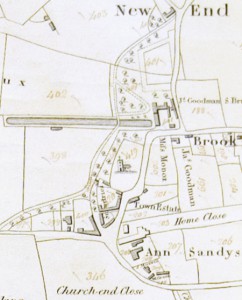 Sorry, all these links need re-making to work with the new website.
The numbers on the various plots are the index into the tithe book that goes with the map, telling who owns what.