A “Hundred” is an old and obsolete division of local government. In medieval times, it was a unit of land for tax collecting. Imagine something midway between a parish council and Central Beds council.

G H Fowler hypothesised, in the 1924 edition of the journal of Bedfordshire Historical Record Society (volume 8), that Manshead was named after the main meeting place in the hundred, and that place was in Eversholt.

Hundreds used to have courts to decide various lawsuits, and needed somewhere to meet. Apparently these were often open-air places, not buildings, where crowds could gather.

V.   THE MEETING-PLACE OF MANSHEAD HUNDRED.

While the place  where  the  Hundred Moot was held seems clear enough when the Hundred takes name from an existing township, both the significance of the name and the situation of the moot-place of Manshead Hundred have hitherto been undetermined; the latter at least seems now to have been cleared up by a study of the Award Map of Eversholt (Beds. County Muniments, M.A. 74).   On
both   sides of   a  path  leading  in  a  south-easterly  direction  from Higher  Rads   End,   lies  a  little group  of  fields  which  carry the Hundred name—Great and Little Manshead Closes, Manshead Path Close,  Manshead  Short  Furlong,   and  Manshead  Field, all on or close to the Tingrith boundary; and there can be little doubt that the Hundred met here at one time.    This fits in with what I have
always   suspected – that  Tingrith  took its  name  from   the  ‘rithe’ (locally  ‘riddy’) or  half-dry brook where the Thing    (the old Scandinavian name for  a consultative assembly) was held; such a brook formed the boundary between the present parishes of Eversholt and Tingrith at this point.    As however the oldest forms of the name are Tingri and Tingrei (both post-Conquest, unfortunately)
I   submitted  the  question  to  Prof.  Allen Mawer, who was good engouh to write thus: “I am in full agreement with your conjecture that the name Tingrith must be bound up with the site of the Hundred meeting-place. The name undoubtedly means Assembly-stream; the absence of the th in the early forms of the suffix is due simply to the Norman’s difficulty in pronouncing it. As to the t for th in the first element, that again is due to Norman influence. This word Thing seems to have given them great difficulty; Fingest in Bucks, is really Thing-hurst.” From N.N.W. to S.S.E., the Manshead fields are exactly in the centre of Manshead
Hundred, before the Royal Lands of Leighton and Stanbridge Half
Hundred were added to it.

Here are (approximately) the fields Fowler is referring to. These are all labelled “Manshead” or “Mansfield” on the 1764 map. 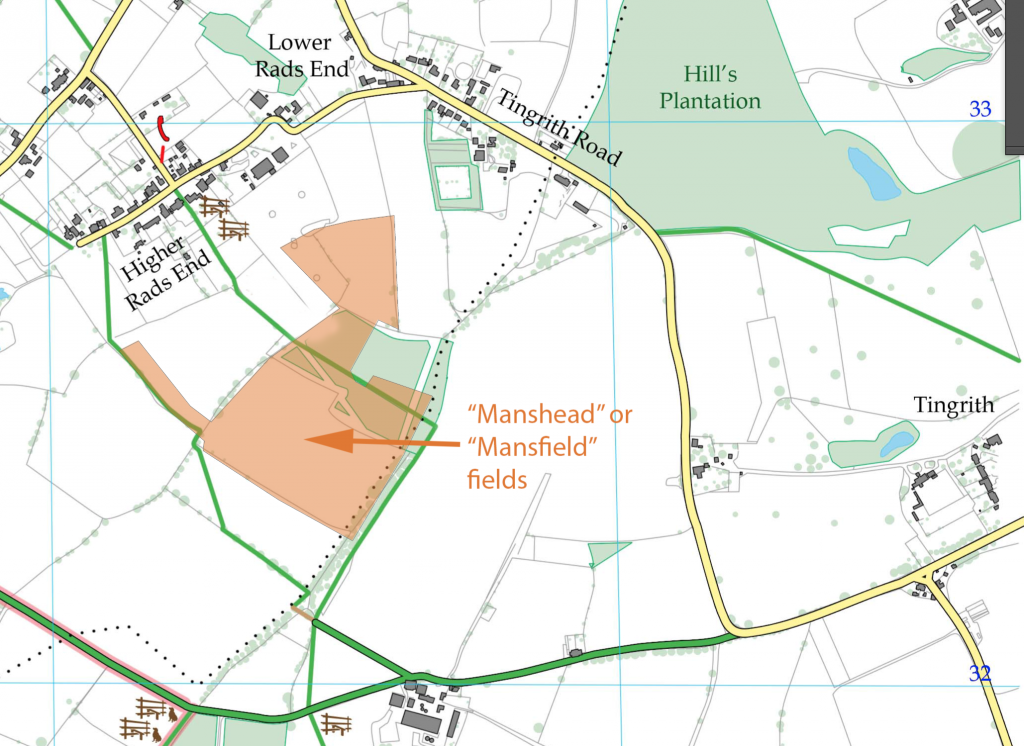 So, maybe Eversholt was the centre of the universe – or at least the Hundred – for a while.