The village recreation ground was given by the Bedford Estate to Eversholt Parish Council in 1902. As is common with Bedford Estate properties, there were legal entanglements to do with old wills, and further legal entanglements added limiting what the parish could do with the land. If the land stops being used as a recreation ground, it must be offered back to the estate at an arbitrated price. Any lawyers out there know whether these conditions are still enforceable? Please leave a comment below!

Anyway, Anna Blomfield provided a copy of the indenture transferring the land to the parish. Thank You, Anna. Quite where Anna’s copy came from is a mystery, but here it is. Click for a bigger version. There’s a transcript below. 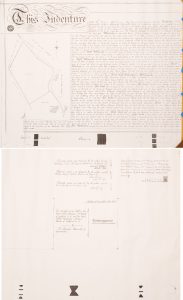 In the transcript that follows, the letters are exactly as the original is written, but the case, upper or lower, has been transformed to a modern usage. Full stops have been added, but not commas, and paragraph breaks added.

This indenture made the fourth day of December one thousand nine hundred and two between the honourable William Edward Sackville West late a lieutenant colonel in his majesty’s regiment of Grenadier Guards of Basil Mansions Belgravia in the county of London and Cosmo Romilly of 25 Old Broad Street in the city of London esquire of the first part the most noble Herbrand Arthur 11th Duke of Bedford KG of the second part and the Parish Council of Eversholt in the county of Bedford of the third part.

Whereas the most noble Francis 7th Duke of Bedford KG by his will dated the seventh day of May one thousand eight hundred and sixty one after making certainly devises of his estates in Ireland and Newmarket gave devised and appointed all the residue of his real estate and hereditaments whatsoever and wheresoever unto and to the use of the trustees named in his said will their heirs and assigns upon certain trusts therein mentioned. And the said testator declared his will to be that notwithstanding anything thereinbefore or thereinafter contained it should be lawful for the said trustees or the survivors or survivor of them and the heirs of such survivor their or his assigns at any time or times during the life of any person who under the trusts herein declared should for the time being be the actual tenant for life of the said real estate and hereditaments thereby limited in trust or any of them with the consent of such actual tenant for life to dispose and convey by way of sale all or any of the said real estates and hereditaments thereby so limited. And whereas the said testator  Francis 7th Duke of Bedford died on the fourteenth day of May one thousand eight hundred and sixty one without having revoked or altered his said will so far as the same is hearinbefore set forth and the same will with two codicils thereto was duly proved in the principal probate registry on the thirty first day of July one thousand eight hundred and sixty one.

Now this indenture witnesseth that

From the above, it appears that the 11th Duke didn’t actually own the Woburn Estate. The trustees of the 7th Duke’s will actually control the land. The 11th Duke had to pay the trustees £200 for the land in order to be able to give it away! Presumably the 11th Duke’s money went to the trustee account of which the 11th Duke was a beneficiary, so this is all a piece of tax-efficient nonsense. Anyway, the Duke then gave the land to the parish council, for no fee, which was very nice.

Not long before, the Duke had had the grand house, Linden, demolished from this land, allegedly because he wanted no nearby rivals to the grandeur of his own estate. So he demanded a veto, forever, on building on the land. And he wants the land back, or at least the opportunity to buy it back, if it stops being a recreation ground. The Duke doesn’t want to give away bits of the park and not be able to recover them later. And, we have to keep fixing the fence 🙂