Skip to content
This picture was contributed by Martin Woolhead.
He says:
“Picture of houses in Berry End. There was a total of six houses on the bank. The bend in the road is just before Berry End Farm, as now, but pub called the Black Boot occupied that site. The lady in the doorway (magnifying glass!) is my great grandmother, Granny Keens.” [Click on the photo right to see a much bigger image]. 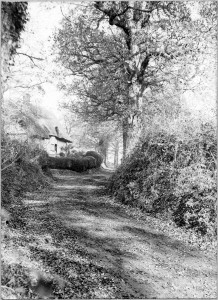 It’s not clear what the date of the photo was, but there is an “Ann Keens”, aged 58 and wife of George, listed as living in Berry End in the 1891 census. In the 1901 census, they still live there, with their grandson Thomas, then aged 15. George was a gardener and Thomas an “ordinary agricultural labourer”. Maybe they’re related to this one, who advertised in the Gardeners Chronicle and New Horticulturist (thank you, Google Books!) in 1891:

When were the cottages demolished?