The church bells and the practice of bellringing deserve a much more comprehensive description, but this will do as a placeholder. The main exhibit here is an entirely incompetently made photograph of a small notice still present in the clock room of the church tower. (EJW was the entirely incompetent photographer.) Here is a photoshopped copy with a plain text version.

“The Belfry is a part of the Church, and is consecrated to the service of Almighty God. The Bells are instruments of Sacred Music, and should be to the Parish at large what the Organ is to the Congregation assembled in Church. They should tell forth the Praises of God, and awaken solemn Thoughts in the Hearts of all who hear them. The office of Ringer is therefore a holy office, and should ever be performed in a reverent manner.”

1. There shall be Six Regular Ringers, and not more than three Probationers, who must all be Churchmen, and will be expected to attend the Church Services.
2. The Regular Ringers and the Probationers shall be appointed by the Rector, who shall also appoint one of the number of the Regular Ringers as Foreman to be responsible for the care of the Bells and the maintenance of order in the Belfry.
3. No Drinking, Smoking. or Bad Language shall under any pretext be allowed in any part of the Church or Churchyard. If a Ringer be guilty of habitual neglect of Pubic Worship in Church, or of any other improper or irreligious Conduct, he shall be dismissed.
4. The Ringers are expected to attend at the Chiming on all Sundays, on Good Friday, and at other times when their Services may be required. They are also expected to ring on Christmas Day, Easter Day, Whit Sunday, and Trinity Sunday, and at such other times as the Rector may appoint.
5. All the ordinary Chiming and Ringing shall be done by the Regular Ringers, and all Profits shall be enjoyed by them.
6. Any Probationer taking the place of a Regular Ringer shall for the time being be subject to the same rules, and enjoy the same privileges as the ringer for whom he acts.
7. The Ringers shall elect two of the Regular Ringers who with the Foreman shall constitute a committee for arranging the  times of meeting and the nature of the Practice; but no Practice shall be held during Lent, or so long as the Body of any Parishioner is lying dead in the Parish and unburied, or at such other times as the Rector may consider unsuitable.
8. If any Ringer be absent from Chiming he shall be liable to a Fine of Three Halfpence for every such absence. And if he absents himself for four weeks without giving notice and without reasonable excuse he shall cease to be a Ringer.
Easter, 1892
William S Baker, Rector.

In the above carefully-printed notice, the words “but no Practice shall be held during Lent” have been crossed out with a pencil. Somebody has written, pleading, “Please Note”, twice, beside rule 8. A scrawl on the left in pencil may be the name “Sid Everet”. At the top is the note, “Beds Association visted Eversholt on Sept 21st 1946″. There is also the date “October 23rd 1948″ and what may be dates 9.1.20 and 11.2.23.

The quote at the beginning of the rule sheet is identical to the text on page 426 of Directorium pastorale : principles and practice of pastoral work in the Church of England,and the rules that follow are very similar. That book was a practical instruction book for vicars, published in 1864.

There’s a barely-legible scrap of paper nailed to an old plank in the clock room. 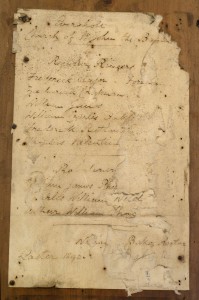 Church of St John the Baptist

Ancestry provides info on some of these people from the 1891 census:

Here are some details about the Eversholt bells from an out-of-copyright text put online by the University of California (thank you , UC!). Obvious typos in the OCR have been corrected, or miscorrected, as may be the case. William S Baker, rector of Eversholt, was listed as a subscriber, so presumably the information came through him and was fairly accurate.

THE CHURCH BELLS OF BEDFORDSHIRE

Their Founders, Inscriptions, Traditions, and Peculiar Uses ;
WITH A BRIEF HISTORY OF CHURCH BELLS IN THAT COUNTY, CHIEFLY FROM ORIGINAL AND CONTEMPORANEOUS RECORDS.
BY THOMAS NORTH, F.S.A.,
Honorary Member and Honorary Secretary of the Leicestershire Architectural AND ARCHEOLOLOGICAL SOCIETY, HONORARY MEMBER OF THE DERBYSHIRE Archeological and Natural History Society, etc.
WITH ILLUSTRATIONS. LONDON : ELLIOT STOCK, 62, PATERNOSTER ROW 1883.
…
WILLIAM EMERTON, whose father, John Emerton, of Marston Moretaine, married Hannah Gary, of Wootton, on the 8th of January, 1699-1700, as is recorded in the Wootton
Register. Their son William, who married Mary Warren in 1766, is described in the entry of marriage in the Wootton Register as a “Clockmaker.” Upon his marriage he commenced business as a Bellfounder in Wootton, sending the 4th bell to Ampthill in the year 1768, and continuing to supply bells to various churches in the county until the year 1789, the date upon the 3rd bell at Eversholt. He sent an entire ring of five to Tilsworth in the year 1776, and six to Biddenham in 1787. On the 5th bell at Eversholt he claims the credit of casting ” this peal,” but is contradicted by the bells themselves, three of which were cast by Miles Graye about a century before Emerton was born. Like his pre- decessors, the Russells, he seldom used any inscription on his bells beyond his own name and those of churchwardens— the 5th bell at Eversholt, however, is an exception to his general rule. He, too, was partial to a display of coins, and on the 4th at Stanbridge, and on bells at Tilsworth, he shows the Pentacle.
…
The mode of ringing or of chiming for Divine Service varies somewhat in different parishes in Bedfordshire, as in the other counties of England.
…
At Apsley Guise and at Eversholt the tenor is rung for a few minutes, followed by a chiming of all the bells.
…
Early Sunday Peals. — With the introduction of the “new service ” (as the Book of Common Prayer was called) in the time of Edward VI., the singing of the Canonical Hours — with the exception of Matins and Evensong — was dropped. The only traces of them we now have in the use of our church bells, excepting the ringing or chiming for Morning and Evening Prayer, are the ringing of the ” first and second peals ” on Sunday mornings at seven and eight, or at eight and nine o’clock, in many parishes. In pre-Reformation times matins was said in all parish churches before breakfast as a preparation for mass. The “first peal “was the call to matins, the “second peal ” to tierce and mass. It is a curious proof how tenacious custom is in having continued the ringing of these bells for over three hundred years after the purposes they served were abrogated, and when few even think of, or inquire as to, the meaning of their sound.
For these ” peals ” — which are rung in many Bedfordshire parishes — the smaller bells are generally used. The mode of ringing varies … The two early-peals have, in many parishes, merged into one ; … Two bells are rung at the same hour — 8 a.m. — at … Eversholt (1st and 2nd, called “8 o’clock bells “), …
…
The bell now used for the Passing-bell (or more properly, the Death-knell, as it is not now rung until after death) is usually the tenor, but this is sometimes changed, as we shall see, in the case of children, for a smaller bell. At the close, or the commencement, or at both, of the Passing-bell, it has long been the custom to indicate the sex of the person departing, or departed, by certain strokes or tolls of the bell.
…
Another usual form of notifying the sex in this county, as elsewhere, is thrice three tolls for a male, and thrice two for a female. Such is the custom … both before and after
the knell at … Eversholt …
…
At Eversholt a bell is rung daily at one o’clock
…
EVERSHOLT.  St. John Baptist. 6 Bells.
I, 2, 4. MILES GRAIE •.’• FECIT • .’ • 1638.
(Diams. 29½, 31½, 37 in., heights 23, 26, 28½ in.)
3. EMMERTON OF WOOTTON FECIT 1789.
John Daniel – William French – Churchwardens.
(Diam, 34½ in., height 26 in.)
5. EMERTON OF WOOTTON CAST THIS PEAL
T WHITE-  PURSER – CHURCH WARDENS
I TO THE CHURCH THE LIVING CALL AND TO THE GRAVE I SUMMON ALL 1786.
(Diam. 41½ in., height 28 in.)
6. JOHN TAYLOR & Co FOUNDERS LOUGHBOROUGH 1882.
(Diam. 45¾ in., weight 17 cwt. 1 qr. 16 lb.)
In 1552 there were here : —
Item ij sacrynge belles
Item in the steaple iiij belles.*
The tenor bell was previously inscribed : —
Thomas Russell of Wootton made me 1727.
(Diam. 44 in., height 35 in.)
The statement of the founder of the 5th bell was rather wide of the truth. These bells, which are in good condition and well cared for, form a very musical ring, and are considered by the people here as second only to those at Crawley. There is a tradition that Handel was once driving in the neighbourhood when these bells were ringing, and that he was so charmed with the beauty of the ring that he ordered his coachman to stop for several minutes in order that he might listen more attentively and enjoy the music more thoroughly.
A MS. book headed “Particulars of Eversholt,” 1802, after noting that a plan of Eversholt was made on parchment in the year 1764, with a folio Reference Book, gives a corrected list of owners, tenants, etc., amongst which is : — Bell Rope acre, containing oa. 2r. 8p., then occupied by William Axam, under the Rev. John Sandys, Incumbent

The name of Miles Graye is cast on three of the bells at Eversholt. There were at least three different people, all bellfounders, taking the name Miles Graye. The first set up a foundry in Colchester. He later employed his son, Miles Graye, as his agent, probably covering Bedfordshire. According to cat.essex.ac.uk/reports/EAS-report-0063.pdf, both the father and son were in business in 1638 when the 3 Eversholt bells were cast. The third generation Miles Graye came along later. Many churches today still have bells cast by (one or another) Miles Graye.