The church clock works intermittently! It used to be wound by hand (by Don Impey among others) and was fitted with an electric winder made by Paul Jaye around 1990. The Jayes moved away and the winder broke, and the clock stopped. Eventually David Smallridge and Richard Earl took matters in hand and the clock started working again in August 2011. Well done, chaps!

David designed and fitted the new winding mechanism, and Richard deals with maintenance and keeping the clock running to time. David gave Emrys Williams a guided tour on 10 November 2011 to help write this article.
The church tower is divided into three sections, one above the other. At the bottom is the tower base, the room behind the west door of the church. A spiral stair in the corner of the tower leads up to the clock room, where the clock mechanism sits. This room is also where the ropes for the bells hang, and where the bellringers stand. The driveshaft from the clock mechanism to the hands outdoors goes straight through the wall of the tower from here. The stairs lead on up to the bell room above, which, surprisingly, is where the bells are hung.
The photos here are of the real clock and were taken by the house incompetent photographer, Emrys Williams. Sorry about the photo quality, I’ll go back and make some better pictures, taking much longer. The technical information here is cribbed from the splendid The Turret Clock Keeper’s Handbook available free from Chris McKay.
This bit below is supposed to be an audio player where you can listen to the clock strike noon. First the clock ticks, then it strikes twelve. Then there’s a lot of whirring while the electric winder rewinds itself. Then there’s the extraordinary reaction of the listeners, Emrys Williams and David Smallridge, right at the end!

You can download that mp3 file by saving the target of this link.

The clock was first powered by weights pulling down on steel cables wound around drums. Two power sources are needed, one to keep the clock ticking and the hands going round, and the other to power the striking mechanism that chimes the hours. These two separate mechanisms are called the going train and the striking train. There are two cable drums in the clock, and at least one of the weights is still present, but the cables have been removed and winding by hand is no longer needed. Both of the weight drives have been replaced by “climbing monkey” motorised chain mechanisms. It’s odd, but these mechanisms don’t seem to be commercially available. Every one seems to be custom made!
For a climbing monkey drive, a chain sprocket is added to the shaft that carried the winding drum for the original weight drive. In the picture below, the large sprocket wheel on the left is for the going train, and the small sprocket wheel on the right is for the striking train. 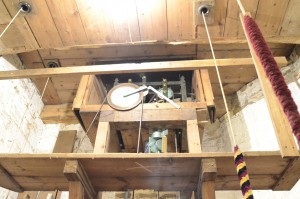 A loop of chain passes over each drive sprocket and hangs free beneath the clock. On one side of this loop hangs the climbing monkey.  The image below shows the climbing monkey for the clock drive, just designed and installed by David Smallridge. He’s upset that it’s not neater. He designed it for a smaller weight, because nobody really understood what was required. Then experiment proved a larger weight was needed and odd bits of steel were stickytaped on. He vows he will get back and redo it properly in due course. The going train climbing monkey is powered by a pair of constantly charged car batteries, to provide plenty of reserve power should there be an AC failure.
The climbing monkey contains a switch assembly and an electric motor driving a small chain sprocket. The weight of the climbing monkey pulls one side of the chain loop down and causes the chain and monkey gradually to sink. When the monkey hits a limit near the floor, the switch assembly turns the motor on and the monkey climbs back up the chain in a few seconds. When the monkey hits a limit at the top, the switch assembly turns the motor off and the monkey stays in position on the chain. It takes several hours for the monkey to sink from the top limit to the bottom limit. 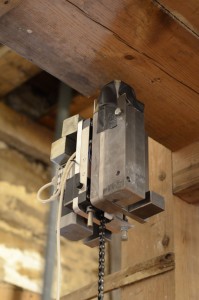 This general view of the back of the clock shows the internal clock face, which carries only an hour hand. The hand rotates anticlockwise, so the numbers on the internal clock face are altered to suit. The internal face is for the convenience of whoever has to set the time.
The cage that holds the clock mechanism is a posted frame type. This was popular from 1790 to 1850. The upright bars of the frame can be individually removed to repair the clock. The uprights at the ends are made of cast iron rather than wrought iron – it’s possible still to see the flash marks from the casting. It’s a side-by-side movement, with the going train on the left sitting alongside the striking train on the right.
The lever hanging down and tied up with string was probably part of the maintaining power mechanism. This acted to keep the going train running while it was actually being wound up. With the electric powered drive, this is no longer needed. 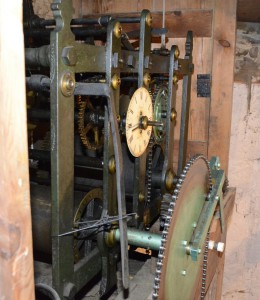 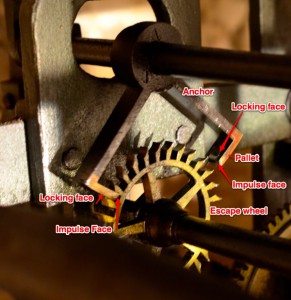 There are thirty teeth on the escape wheel. 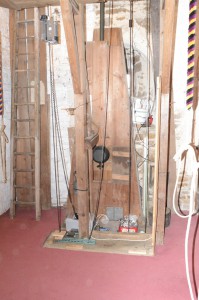 The maker’s name on the clock is “Defontaine, London”. The church booklet St John the Baptist – A Brief Introduction states that the clock was installed in 1890. There is a reference to “De Fontaine, Louis of London A brief document giving some working dates for Louis De Fontaine of London (Updated 12 Oct 2009)” at http://www.clockswatches.com/showindex.php?em=D&page=2 but that requires paying money. Ancestry.com (which also requires paying money, but I already have a subscription) shows Louis Defontaine aged about 75 in the 1841 census, born abroad around 1766, a watchmaker living in St Pancras. He was listed in the 1825 Pigot’s Directory of London and in the 1848 Post Office directory, and the 1851 Post Office directory and the 1856 Post Office Directory with a clockmaking business at 70 Wilsted Street, St Pancras. It seems unlikely that this is all the same person in 1890. Maybe his business carried on in his name after his death, or maybe he had a son of the same name? But the 1841 census shows him living with a plasterer and his wife, with no servants, which sounds unlikely for the proprietor of a successful business. He may well have died in 1848, according to Freebmd:
Surname  First name(s)    District       Vol  Page
Deaths Jun 1847   De Fontaine  Clara Mary        St Pancras  1 270
Deaths Mar 1848   De Fontaine  Louis                St Pancras  1 327
Deaths Sep 1848   De Fontaine  Frederick Peter  S Pancras  1 *

These are the only De Fontaines to die in the whole country from 1841 to 1861, so it seems possible this was the right family.

Did his business continue after his death? Or is the date given for the church clock wrong? Or maybe the clock was second hand? Or maybe I have no idea what I’m talking about? Because Anceestry.com also has the text of  G. H. Baillie, Watchmakers and Clockmakers of the World, London, England: A. R. Mowbray & Co. Limited, 1947. That book has various Fontaines and De Fontaines of varying dates and spellings, but doesn’t have the Louis De Fontaine from St Pancras. It could be some completely different company.

The Public Face of the Clock

Meanwhile, here is a picture of the clock face taken by Emrys Williams in May 2011 and placed by him in the public domain. 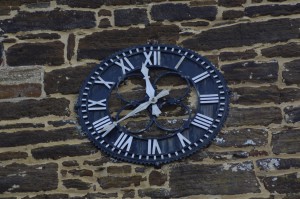