Report on manuscripts in various collections
by the Royal Commission on Historical Manuscripts; Macray, William Dunn, 1901 contains this fasinating document (click for large version; transcription and translation below). 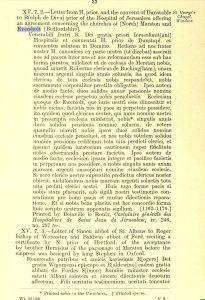 The original was in the archives of St George’s Chapel at Windsor Castle, and may still be there. It was also printed, or perhaps misprinted, in Cartulaire générale des Hospitallers de Saint Jean de Jerusalem, by Delaville le Roulx; Paris, 1894, which the notes and footnotes in the report above acknowledge, but the Cartulaire version seems to be wrong, since its changes to the text make a nonsense of the business deal and make the priest feminine. I [EJW] am going to ignore the Cartulaire version.

Here’s a transcript of the above report, with some of the Latin characters modified to more conventional versions in modern representation (u -> v, i -> j). Skip this section if you don’t feel like reading your mediaeval contracts in the original this morning, otherwise blame EJW for any mistakes:

Here is my [EJW] attempt at translating that, and please remember here that my study of Latin ended something over 50 years ago. PLEASE, anyone better at Latin translation (and it’s hard to be worse) correct me with a message via the contact form. There’s my modern English explanation of what’s going on beneath this, you don’t have to wade through the mediaeval legalese unless you want to 🙂

This is a proposed contract between Dunstable Priory, founded by Henry I for Augustinian canons in 1132, and the Order of Knights of the Hospital of Saint John of Jerusalem, or Knights Hospitaller, founded by 1113, after the first crusade. The Knights Hospitaller were associated with a hospital and hospice in Jerusalem, providing medical care for pilgrims, and soon became an armed force, providing security services for pilgrims too.

The document is not dated but is estimated to have been written some time between 1162 and 1179. Henry II is on the throne, and Becket was murdered in Canterbury Cathedral in 1170.

It’s not clear whether the contract actually was eventually agreed. The original document was, and maybe is, in the archives of St George’s Chapel at Windsor Castle. Since it is preserved in an archive, it seems likely that the contract was sealed and did come into effect.

It’s clear there has been some substantial dispute between the priory and the Hospitallers over the running of two churches. H, prior of Dunstable (we don’t know his full name), sent a canon of Dunstable, again confusingly known only as H, to R, Ralph de Diva, prior of the Hospitallers. Canon H returned with the outline of a deal. Prior H drew up and sealed a contract and sent it back to prior R for his seal.

It seems that Marston church (North Marston in Buckinghamshire, north of Aylesbury) belonged to Dunstable Priory. Quite what “belonged to” meant at this time is not clear. The system of advowson for appointing priests doesn’t seem to have been established then. Anyway, Robert of Buckingham is the priest at North Marston church, and the priory is offering to rent the church to the Hospitallers in perpetuity, complete with its incumbent priest. While Robert lives, he will report to the Hospitallers, and the Hospitallers will pay rent of one silver mark per year to the priory. After Robert dies, the Hospitallers will pay two shillings per year rent to the priory. It’s not clear quite how much money this is.

The earliest parts of North Marston Church date from 1150. Eversholt Church was built about the same time. Footnote 88 [!] of the section on Dunstable Priory in A History of the County of Bedford  tells that the priory transferred Marston Church to the canons of Windsor in 1450, so that may be how the contract ended up in the archives there. All this machination was happening within living memory of the foundation of both churches.

A mark of silver is two thirds of a pound (weight of silver metal?). A solidus, which I have translated as shilling, may have been worth one twentieth of a pound. So the two shilling rent was much lower than the one mark rent.

Well, what a mercenary deal for what is ostensibly a sacred place

Much thanks to Pacifica for putting me right on an impenetrable bit of Latin.