Skip to content
This information partly from http://familytreemaker.genealogy.com/users/j/o/w/Peter-F-Jowers/GENE2-0007.html and partly from Ancestry.com.
Matthew has also been spelt Mathew; Matthew is the commoner form. There is, unfortunately, a much more famous priest called “Matthew Henry” also around at the same time as Henry Matthew.
Born 24 Apr 1807 in Kilve, Somerset; Son of John Matthew.
died 24 Jun 1861 in Brighton.

Henry signed a letter printed in the Caledonian Mercury of 3 January 1848, along with many other Bedfordshire priests, supporting the appointment of Dr Hampden to be Bishop of Hereford. There was apparently some controversy about Hampden’s suitability. Lord John Russell replied, and may have organised the letter. Wikipedia says he nominated Hampden for the post.

A small ad appeared under the heading “Benefices and Appointments Vacant” in Trewman’s Exeter Flying Post or Plymouth and Cornish Advertiser on 3 Jul 1861:

Seems a bit odd to be advertising in Cornwall. What was the process of appointing a new rector? 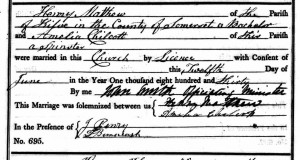 So who’s this, then?

Henry Matthew’s will appears in the index for probate.