Thomas Dutton appears, according to the poster of rectors in the church, to have been the incumbent for an infeasibly long time. There’s confusion, because there were actually four Dutton rectors in a row.

CCED definitely shows that John and Thomas were two separate people; this doesn’t seem to be a case of confusion between old style and new style dates.

The Duttons were in office during the civil war and the Commonwealth that followed, when religious matters were in great confusion. Many priests in England – somewhat more than half of the total – were thrown out of their churches in this period, losing their living, their property and often their liberty. Their families suffered great distress. Eversholt was in an area of the country which notionally supported the Rounhead side and so perhaps would be treated more leniently than otherwise, but quite what happened to the rector is unclear. A good general description can be found in The parish registers and records in the diocese of Rochester : a summary of information collected by the Ecclesiatical Records Committee of the Rochester Diocesan Conference, W E Buckland, Kent Archaeological Society, 1912, available for free at https://archive.org/details/parishregistersr00chur on page 9.

Normal service was resumed on the restoration of Charles II in 1660.

The parish register of burials (which one might expect to have a pretty good idea of who was rector and when they died) says that:

I can’t find these people in index ecclesisasticus.

Here’s a different version for one of these:
However, Alumni oxoniensis: the members of the University of Oxford, 1500-1714: their parentage, birthplace, and year of birth, with a record of their degrees. Being the matriculation register of the University, alphabetically arranged, revised and annotated, Volume 1 has this entry at page 436:

So this Thomas Dutton only graduated in 1628. “Compounded for the first fruits” means “became rector”. His father became the rector of Eversholt in 1602.
and here are more Dutton snippets from Northamptonshire and Rutland clergy from 1500, Volumes 4-6 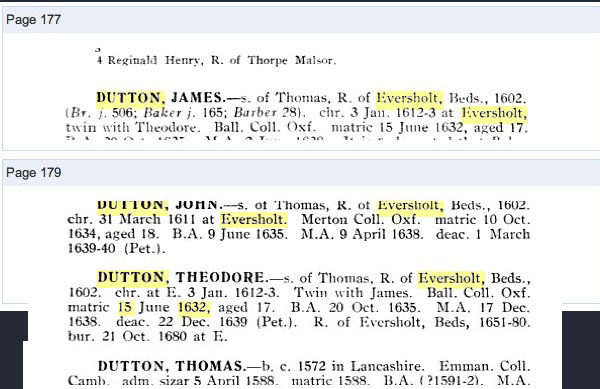 CCED says that there was a visitation to Thomas Dutton in March 1604 and he got into a bit of trouble. There wasn’t a surplice available for him to wear. 1604-10-14, he and the curchwardens certified that one had been provided, and that he usually wore it.
What does that have to do with this Liber Cleri entry for 1603?

That’s rather cryptic.
There are records for Theodore Dutton at CCED:
that says he was appointed rector at Eversholt on 26 Jan 1642. There was a libc, a bishop’s visitation, in 1662. He died on 2 Feb 1681, which must have been quite inconvenient, having been buried in the previous October. The other remarkable event was his subscription to the Act of Uniformity of 1662. That was meant to flush out all the nonconformists. The fact that Theodore subscribed meant that he was a straight-down-the-middle Church of England type.
James Dutton was appointed rector of Eversholt on 2 Feb 1681, and died on 1 April 1699, something over a year after he was buried. Clearly, the CCED database takes appointment of the next rector as the date of death of the previous one. James left a will but I can’t find it in the usual places online.
There was a Matthew Dutton who was a nonconformist priest around 1700. Was he a relative?