Here’s a picture of him, cropped from this image. Click for a slightly bigger version. 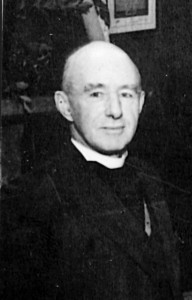 The Supplement to the London Gazette of 9 Jan 1940 reported that he was to be a chaplain, 4th class, in the army:
Rev. William George Dean-Pitt MERCER, B.A. (111560), and relinquishes the rank of Lt.
Presumably that means he was previously in the army as a Lieutenant, and re-entered it as a chaplain?
Despite his very specific name, William remains very hard to find online. There are very many William George Mercers to sort through!
Arlene Smith found this page and wrote from Canada:
The Rev William George Dean-Pitt Mercer was born to Anglican Church missionaries in South Africa, possibly Capetown, Woodstock, St Mary’s which was where his sister was baptized. (Augustine Annie Louise Marsden Mercer)
Parents were the reverand William Marsden Mercer son of an Architect named Thomas Mercer. (my ggggrandmothers brother) Liverpool. and Susie Grant Dean-Pitt. born Hythe, Kent 1857
The family returned to England in 1914 and William Marsden took a living at Flockton, W. Yorkshire where he stayed until 1921 when he
moved to London until his retirement in 1930.when he moved to Bletchley where his son had a living. Between 1921 and 1925 he is living in London with his parents. as per Polling records.
Doesn’t look like William George ever married.
Thank you very much, Arlene! It’s wonderful to know we are read worldwide.