There was a lethal outbreak of diphtheria in Eversholt in 1883. It was noted because the “Local Government Board” was collecting reports on diphtheria in an attempt to understand the cause. A Dr. Parsons made areport to the board:

Diphtheria also having occurred at Eversholt during the summer of 1883 and beginning of 1884, Dr. Parsons found that some of the first cases (which were fatal and involved children) had been recognised, whilst others had been registered as quinsy and ‘putrid sore throat’. Suspicious sore throats amongst adults had preceded these cases, and a school-treat took place at which during a shower some hundred children had congregated in a cowshed, surrounded by manurial nuisances. The first cases were present on this occasion and most probably contracted their infection from the assemblage. It is also noteworthy that cases of scarlatina preceded those of diphtheria. Histories are related where children in whom the false membrane had not yet developed, but were ailing with corysal symptoms infected others, this suggesting an early infectiousness of the disease, similar to measles and whooping-cough. The sanitary condition of the school-house was found virtually free from blame, the only suspicious conditions being the presence of an open drain at the back receiving farmyard refuse, and the emptying of a contiguous over-full cesspit, the content of which were placed near the school. The history of the early cases could not be made out, but throat illness of various degrees seemed to have preceded the first undoubted case of diphtheria. Some of the residents at the school were attacked at this time with scarlatina, and cases had existed in the parish in 1883, so that Dr. Parsons supported the hypothesis that the first case caught his diphtheria from scarlatinal cases, a connection which, with its obverse, he had noticed elsewhere.

The entire report was: (from here)

Parsons, H F: Report to the Local Government Board on the recent prevalence of diphtheria at Eversholt in the Woburn Rural Sanitary District. London, Eyre and Spottiswood, 1884, Fol. [Folio?] 7p [pages?]
but I still haven’t found the complete original. Here it is in Melbourne:

Unfortunately, the university of Melbourne does not seem to have any obvious method for ordering a copy.
The author was H Franklin Parsons, 1846-1913. 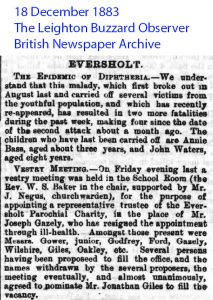 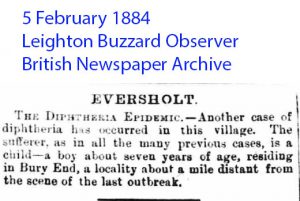 One Reply to “Diphtheria in Eversholt”