The Post Office Directory of Northamptonshire, Huntingdonshire, Bedfordshire, Buckinghamshire, Berkshire and Oxfordshire of 1869 has this entry for Eversholt. [Thank you, Google Books!] 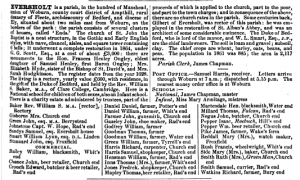