E R Lovell is the name on the back of the postcards of Eversholt produced sometime in the first half of the twentieth century. 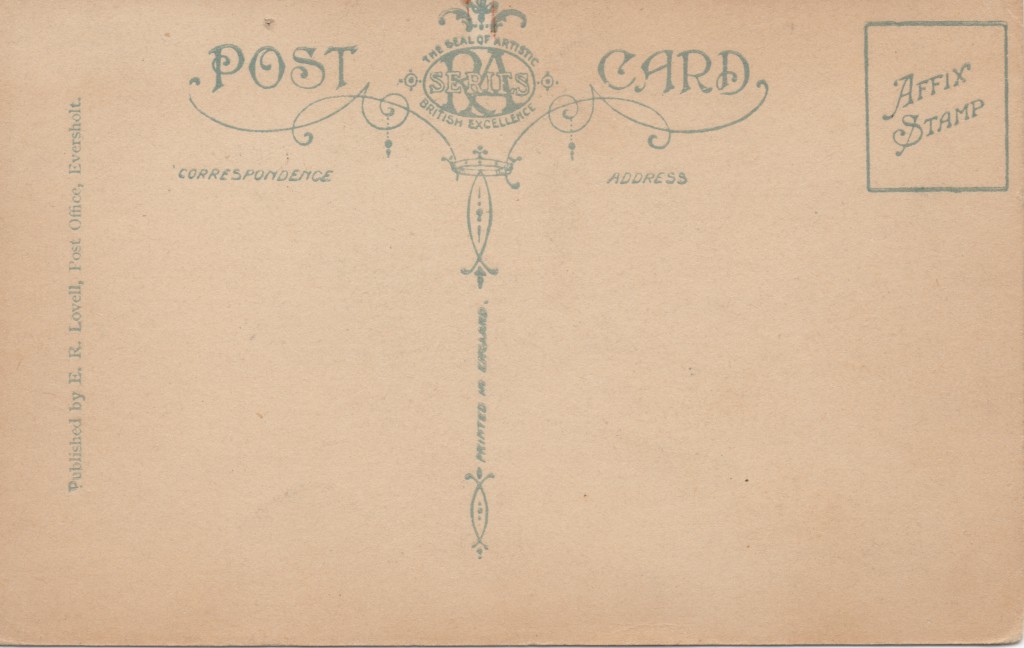 This is what all of the postcards look like. There isn’t a date on any of them. The “RA Series” of postcards, with “The Seal of Artistic British Excellence”, was apparently common across the whole country, although details of the operation do not seem to be available online. There seem to have been many different firms producing local postcards. This may have been “R.A. (Postcards) Ltd., London, E.C.4, Originally the Rapid Photo Printing Co., Ltd., London, E.C.”.
Kelly’s for 1914 tells that Edward Richard Lovell, farmer, lived at the Post Office then. The 1911 census shows that G Bence Smith ran the Post Office, so Lovell arrived some time between 1911 and 1914. There’s no E R Lovell listed in any phone book that Ancestry has indexed.
There are two pictures of the church with iron railings here. The first is from A History of the County of Bedford, published in 1912, so presumably the picture was taken in 1912 or before. The second is an E R Lovell postcard, and looks (from the growth of the ivy on the church wall) to have been taken perhaps a year later. So maybe Lovell arrived around then and immediately commissioned the photos for his local postcards series, a new proprietor with modern ideas for the business. Maybe.
[Ancestry login required for most of these links, sorry]. Edward Richard Lovell is listed in the 1911 census for Bedford. He was 35 years old, meaning he would have been born about 1876. He lived then at 23, Western Street, Bedford, in a house of 9 rooms – a big house. His wife, Emily Maud, her two brothers, and Annie Glover, 28, shared the house. Emily Maud gives her occupation as dressmaker but, unusually, as employer, working at home. Edward is listed as “assisting in business” at home, so maybe she employed him! There is a birth record for Edward Richard Lovell in Southampton in the first quarter of 1877. There’s adeath record for Edward R Lovell registered in Bedford in 1944 which also gives a date of birth of 1876, so that’s consistent. He’s hard to find in 1901, because he’s down as Edd Richd Lovell, a boarder at 70, Argyle Street, Cambridge, and he’s listed as a worker. His occupation is hard to read but Mark Steevens has managed to decipher it as “surveyor”.  He was 14, a boarder at Gloucester House, St Mary Southampton, in1891, when his occupation was “colourist”. In 1881 he’s living with his parents, Richard and Susan Lovell, in Highfield, South Stoneham, Southampton. There’s a marriage record in 1906 in Bedford registration district, when he married Emily Maud Housden. There’s a death record for an Emily Maud Lovell of about the right birthdate in 1970, at the age of 95. There are no Lovell children in Edward and Emily’s 1911 household, and no Lovell children registered after that with a mother’s maiden name of Housden.