Millard, Sturman and Sanders, all of Eversholt, were convicted of sheep stealing and sentenced to death in 1829. Being condemned to death must have come as a bit of a shock. None of them had any previous convictions. The sentence for all of them is recorded in the record of the court, with a note that the death sentence was commuted to transportation for 7 years. [This image is from Ancestry.com, whose Ts&Cs seem to allow publication of individual records as part of a history. Click on the image for a bigger version.] 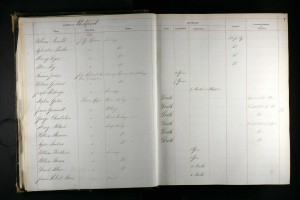 Millard and Sturman are recorded on the vessel Manlius in Van Diemen’s Land (Tasmania) on 23 April 1830. Millard was “Assd [assigned?] to B Horne Esq.” in the convict muster for 1830 and again in 1832. He was given a ticket of leave in 1835.  Sturman was recorded as “Assd to Mr A Gatonby” in 1832. [Sorry, Ancestry login required to access those records. They’re not very interesting,anyway!]
Lydia Sanders (or Saunders) was recorded on 3 November 1829 in Van Diemen’s Land on the ship Eliza.
There is a notice in the small ads of the Hobart Town Courier for 8 July 1836 stating that they were now free. [Much thanks to the National Library of Australia!]
The Graves of Tasmania site states that Lydia was born on 15 Oct 1809 in Toddington, that her parents were Thomas Sanders and Mary Fensham, and that she married Thomas Wright on 31 March 1838 inLaunceston, Tasmania. The site gives no source for this information, however. Contrarily, Ancestry provides this record:

If Lydia married in 1831, she was still a convict. It’s not clear this is the right person, though.
Ancestry also provides an 1841 census record for a Thomas Sanders in Toddington. He was 72 then, making him born about 1769. He’d have been 40 when Lydia was born (if indeed he was the right person).