In 2012, Marion Smith of Water End provided her scrapbook for copying. Thank you, Marion! On of the items contained was what seems to be an article in a provincial paper, although what paper and what date are unclear. It was in a series called “Out Of Town” by “Dick Dawson”. It’s just about old enough for violation of its copyright to be less than a mortal sin, so it’s reproduced here. If you’re the copyright owner and would like it removed, please get in touch. Until then, here is the text, and a scan of the original. Click the scan for a much bigger version. Marion Smith says that the woman ono the bike in the picture was Mary Barr.

The article quotes Rosa Harris, then aged 95. Ancestry.com reports that a Rosa Harris died in Ampthill Registration District in Q4 1980, having been born about 1884. That puts the date of the article at about 1979. Ancestry also reports that a Ralph Evans died in Bedford registration district in 1994, having been born in 1904, which is also consistent with a date for the article of 1979. 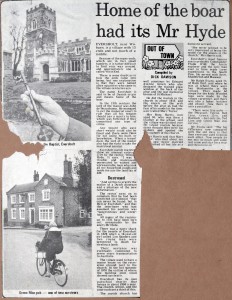 Home of the boar had its Mr Hyde

Out Of Town compiled by Dick Dawson

EVERSHOLT, near Woburn, is a village with 13 ends and not much of a middle.
Because of the many ends, which are in fact small hamlets. it is rather difficult to find your way around, and appropriately one is called Witts End.
There is some doubt as to how the ends came into being, but one explanation is that they were named after squatters who came to the village centuries ago.
The name Eversholt is said to be of Danish origin and means home of the boar.
In the 13th century the lord of the manor was John de Beauchamp. He managed to get the manorial court to rule that all his tenants should pay a surety to him, which was forfeited if they committed any type of crime.
Any tenant who gave short weight could also be fined and there were fines for not using his malt, or brewhouse. When a tenant died, the lord of the manor also had the right to take the man’s best animal.
Eversholt parish registers show an unusual entry in 1719 by the rector, William Hyde. It says: “I was … trouble and maliciously persecuted by wicked and unreasonable men who took all my household goods and made me pay the land tax of £20.
“And all this to gratify the malice of a Dutch diocesan and a Pharisee of the new reformation.”
The rector went on to complain that he had been convicted on evidence “that can never be found, but in Hell or Eversholt.” and that the interloper who had assumed his position was “superstitious and uncertain.”
All pages of the register up to 1721 have been torn out. presumably by the angry Mr Hyde.
There was a nasty shock for the people of Eversholt in 1829 when a 19-year-old girl called Lyn Sanders and two young men were sentenced to death for stealing a lamb.
Their sentence was eventually commuted to seven years transportation to Australia.
The village used to have a manor house on the recreation ground next to the church. In the hot summer of 1976 the outline of where the building once stood showed up clearly.
Eversholt has its own parochial charity that brings in about £900 a year. The church, school, and the poor each get a third of this.
The parish church has wall paintings by Edward Aveling Green who also designed the stained glass window at the back of the altar and the war memorial bronze of St Michae1.
He did the murals in the church in about 1910. and the angels on the arch before the altar all had the face of his model at the time, a girl called Mary Taylor.
Mrs Rosa Harris, now aged 95. who was then a teacher at the school, said the village was divided over the Green murals because many thought they were too modern and spoiled the atmosphere of the church. Harris said that Mary, who died about ten years ago. never married and worked all her life as a domestic servant.
“She never seemed to be very impressed at being the model for the angels in the church.” Mrs Harris said.
Eversholt’s most famous son is probably Commander Frank Wild, the Arctic explorer and the only man ever to have made three expeditions to the South Pole. He served with Scott. Shackleton and Mawson.
Mr Ralph Evans, aged 75, of Rads End, said when he was at school there were two blacksmiths in the village. They made 6d hoops for the kids. Wooden tops were made by the village carpenter, and there was also a baker, butcher and grocer. Now there is only a post office.
“There were five pubs – the Pheasant. Falcon. Red Lion, Green Man and Roebuck – but only the Red Lion and Green Man still survive.”
Mr Evans said: “The big difference now compared with the old days is that then everyone used to know each other. Now people do not mix so much and some just come and stay for a year and then move on.”