This page is a incomplete attempt to understand the Particular Baptists of Eversholt.

Particular Baptists are so called to differentiate them from the General Baptists. There’s a wikipedia article on them here and a longer article here, neither of which enlighten me (EJW) in the least. They were a religious sect, a branch of which apparently briefly flourished in Eversholt. Baptists seem to be exceptionally fissiparous. There’s an explanation here which is almost intelligible, if you squint at it in the right way.
The baptists in Eversholt seem to have faded away about 1750. There was a longer-lived congregation next door in Ridgmont.
The Transactions of the Baptist Historical Society are available as a pdf here.
At page 20, a survey of baptists congregations before 1660 contains the enigmatic line, “Eversholt, 1653 at Berks Association”. This was, it is thought, a General Baptist meeting, not Particular.
At page 32, a survey suggests that in 1715, there was a congregation in Eversholt labelled as “Anabaptist”, with 120 people and a pastor called Matthew Dutton. Of course, Duttons had been rectors of Eversholt for most of the previous century. Was this a relative, rebelling from the CofE?
This, enigmatically, from page 240:
The Eversholt people had William Gates of Gamlingay and James Grant of Wellingborough to preach at the dedication this year.
From page 238 (and this may be page 238 of a different volume):
1692   May24th   In London
On whether the praises of God should be sung in public assemblies? Many churches were distracted on this subject, and many pamphlets had appeared. The protagonists included B. Keach, Isaac Marlow, George Barrette, Hercules Collins, Richard Allen, and Thomas Hollowell. John Bunyan advocated singing in 1688. The General Assembly of Particular Baptists intervened and referred the subject to the consideration of Andrew Gifford, Bristol; Edward White, Eversholt; Henry Austin, Norwich; Robert Keate, Wantage; John Wills, Allesbrey; Samuel Buttel, Plymouth; and John Scott. They were directed to consider the question “only respecting reflections and matters of fact.” They reported on the above date, a truce followed, and the practice of congregational singing more and more prevailed.
In 1689 the General Baptist Assembly, following the lead Thomas Grantham gave in 1678, sanctioned the singing of praises in the church by a soloist, but forbade congregational psalmody. The same year the Particular Baptist Assembly was asked to take action, but refused until 1692.
So this was the particular baptists forming a committee, including Edward White from Eversholt, to decide whether it was appropriate for the congregation to sing in church. The particular baptists said it was. The general baptists said it wasn’t. This was 1692, or thereabouts. It’s particularly amusing that the matter was debated by the “General Assembly of the Particular Baptists”!
This clipping comes from a chapter called “The Life and Works of Mrs Ann Dutton” and that would probably reward much more research. 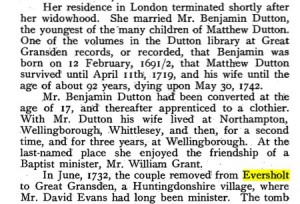 This implies that Matthew Dutton, assumed to be Particular Baptist pastor at Eversholt, had many children, then died on 11 Apr 1719. One child was Benjamin Dutton, born 12 Feb 1691 [these are Julian calendar dates], and married widow Ann before 1732. Matthew Dutton’s wife was born about 1650 and died 30 May 1742. There is a Dutton Library and Great Gransden. Did that, or does that even now, hold information about Eversholt in the 1600s?
Transactions : v. 1-21 (April 1901), Congregational Historical Society, says:
Richard Conder died and was succeeded as pastor by Richard Dix who in turn was followed by Jabez Conder but the entries in the Church Book after 1704 are very fragmentary. On the death of Jabez Conder relations between the Croydon church and its related group of members at Great Gransden became very strained. The Great Gransden members invited Benjamin Dutton, son of the Baptist pastor at Eversholt, Beds., to preach to them and then offered him the pastorate. The Croydon members objected but the Great Gransden group had the Church Book and entries from 1732 onwards relate to Great Gransden only the Croydon church soon faded away.
Baptist Churches in the Bedford Area says:

There is more about Edmund White at 1677/89 London Baptist Confession of Faith :

Edmond White Evershall, Bedford Listed in The Narrative of the Proceedings of the General Assembly as Edward White, it is assumed that these are the same individuals. Edmund White is known to have been associated with the Evershall church as early as 1653, when he and Thomas Vaux were its representatives at the Abingdon Association meeting. He seems to have worked closely with Benjamin Cox in Association matters. In 1691 he appears in the records of the Steventon church, participating in an ordination, and in 1692 is listed in the Narrative under the name Edmund, still representing Evershall.

And this too, but I’ve lost the link:

There is some utterly arcane discussion of Baptists and Eversholt in 1653 in [DOC] A Critique on Landmarkism by Dwane Gilliland which seems to be a modern book revisiting arguments raised in the 1800s about arguments raised in the 1600s by some people who practiced a religion dedicated to a god of which I take no account. Sorry, I can’t bring myself to read any of it, it’s just the search engine trips over the word Eversholt… Wikipedia has a go at defining Landmarkism here, but, as usual, I came away none the wiser.