Benjamin Eustace Wild was the son of the headmaster of Eversholt School.

Here is his obituary. The two versions are almost the same. Click for big versions. 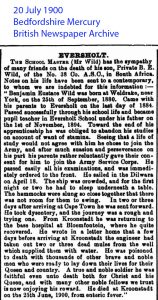 The schoolmaster (Mr Wild) has the sympathy of many friends on the death of his son, Private B E Wild, of the no. 38 co. ASC, in South Africa. Notes on his life have been sent to a contemporary, to whom we are indebted for this information:

“Benjamin Eustice Wild was born at Weldrake, near York, on 25 September, 1880. Came with his parents to Eversholt on the last day of 1884. Passed successfully through his school life and became pupil teacher in Eversholt school under his father on 1 November, 1894. Towards the end of his apprenticeship he was obliged to abandon his studies on account of want of stamina. Seeing that a life of study would not agree with him he chose to join the army, after much suasion and perseverance on his part his parents rather reluctantly gave their consent for him to join the Army Service Corps. He passed easily all his examinations, and was immediately ordered to the front. He sailed in the Dilwara on April 18. The ship was crowded, and for the first night or two he had to sleep underneath a table. The hammocks were slung so close together that there wasn’t room for them to swing. In two or three days after arriving at Cape Town he was sent forward. He took dysentery, and the journey was a rough and trying one. From Kroonstadt he was returning to the base hospital at Bloemfontein, where he quite recovered. He wrote in a letter home that a few days before arriving at Kroonstadt the engineer had taken out two or three dead mules from the well which supplied them with water. He was poisoned to death with thousands of other brave and noble men who were ready to lay down their lives for their queen and country. A true and noble soldier he was faithful even unto death both for Christ and his queen, and with many other noble fellows we trust is now enjoying his reward. He died at Kroonstadt on the 25th June, 1900, from enteric fever.”

[EJW] What a waste. Irrespective of the sense or otherwise of fighting the war, Benjamin was killed by the incompetence of his own army, transporting and housing him in such squalor. Poor man