That’s the description of the monument in Eversholt Churchyard from Barbara Miles’s survey. The monument was until recently (2018) sunk below the grass but has now been unearthed. 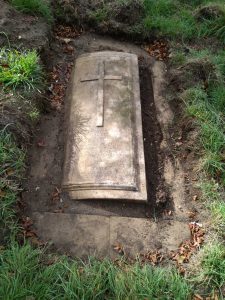 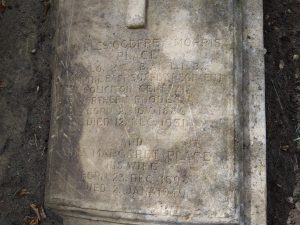 CGM Place was honoured for his bravery in WWI, and incidentally had an even more honoured son, who won a Victoria Cross in WWII.

What are Charles and Anna doing in Eversholt churchyard?

Charles was the only child of George William Place and Henrietta [Usher?]. He was born in India on 1886-11-02, baptised at Saint Paul’s Cathedral, Ranchi,  Bengal, on Boxing Day. That’s in the North-East corner of India, near Bangladesh. George was a barrister and had served in the Indian Civil Service, and later, in 1913, was Reader in Indian Law at Trinity College, Dublin. After India, the family lived in Dublin. Charles went to St Columba’s college, a posh boarding school near Dublin. Charles followed his father into the law and qualified as a barrister in Dublin in 1909. He was still living at home there for the 1911 census, when the family lived at 9 Ailesbury Road with two servants. They reported their religion for the census, a sensitive matter in Ireland then, as protestant; that made them part of The Establishment.

9 Ailesbury Road was a posh house. It’s now part of the Argentinian Embassy to Ireland. 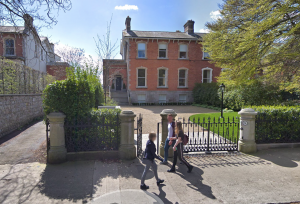 The London Gazette of 1912-05-03 tells us that Charles was appointed an Examiner’s Assistant at the Land Registry of Ireland.

He did later apply for the 1914-15 Star, in France in July 1915. Here’s the record of his medal application, from Ancestry.com. 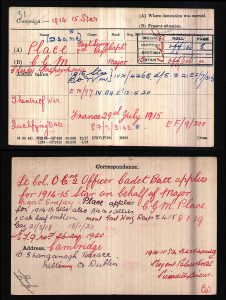 Amid all this, Charles found time to marry. The Derbyshire Advertiser and Journal, 1916-05-05:

Anna was 22 and Charles 30 in 1916. Anna was born in Delhi in 1894. ICS stands for Indian Civil Service and PWD may stand for Public Works Department. Children: Barbara Hamilton Place was born 1917-02-05. Helen Margaret Place, 1919. Basil Charles Godfrey Place 1921-07-19. Barbara and Helen are both registered in the Ampthill registration district, so Anna must have been living around Eversholt somewhere while Charles was serving in France.

When Charles was a temporary captain, he was awarded the Military Cross. There is an announcement in the London Gazette of 1917-01-10.

For conspicuous gallantry in action. He led his men in the attack with great courage and initiative, captured his objective and consolidated the position. He set a splendid example throughout.

Quite what battle this was isn’t clear, but he was in the 8th battalion on the first day of the battle of the Somme, when the 8th did actually achieve their objective, famously kicking footballs across no-man’s land, so it might have been then.

Here he is from the Irish Independent of 1917-01-17, from the British Newspaper Archive: 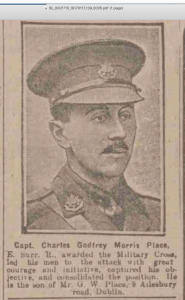 The Dublin Daily Express of 1917-06-11 has a report on the speech day address at St Columba’s college, in which the award of the MC to an old boy was noted. (This is the only evidence for his school.)

For conspicuous gallantry and devotion to duty when in command of an assaulting company. Being unable, owing to the chaotic state of the ground and heavy shelling, to reconnoitre in daylight, he went up and down his company all night to get them in a position to attack at dawn. He was wounded while organising attacks on machine-gun positions which were holding up the line, but did not go back until quite certain that the attack could not get on any further.

And even more. The medal application form above bears the note, “ment[ioned in dispatches?] Earl Haig [unreadable] 7.4.18”, and it does appear that he was mentioned in dispatches, since he applies for an “Oak Leaf Emblem” which notes the event.

C G M Place seems to have been a very brave man.

The Cambridge Independent Press of 1918-06-14 reports him as being president of the committee for a sports display by Number 2 Officer Cadet Battalion at Fenner’s, Cambridge. It’s a reasonable guess that he had been moved back to England as a result of the wounds he received.

The next record found so far is from United Empire, from 1921. It notes (page 260) that Major C G M Place, DSO, MC, has been appointed a magistrate in Uganda by the Colonial Office.

It needs a better historian than me [EJW] to explain the nuances of British colonial policy in the 20th century. It doesn’t appear very pleasant. There was a white British Establishment that connived to take and keep power away from the local inhabitants. Much of the impetus for this was commercial. British companies wanted to exploit the local resources and the British government was happy to support them in this.

The first link with Eversholt comes from a shipping departure record from 1923-12-29. Charles and Anna sailed on the “Mantola” from Folkestone, bound for Mombasa, which was then listed as in Uganda. [Has it moved?!] Their UK home address was given as “Benstrad, Eversholt, Bletchley”. There isn’t a Benstrad, but there is a Berrystead. There’s another misspelt record to back this up. On 1926-07-07 they arrived from Mombasa on board the SS Mulbera. The address there is given as “Bevveystead, Evresholt, Blatchley”. So it seems they were living, while in the UK, at Berrystead. 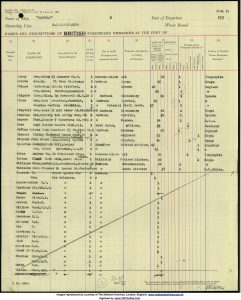 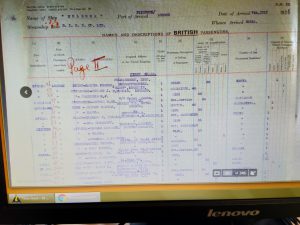 Throughout the 1920s, the directories list the Green family at Berrystead, Edward Aveling Green up until 1928 and then Charles Green. They owned the house. Perhaps the Places were friends of the Greens, and did a posh version of sofa-surfing at Berrystead on visits to England. Anna’s son, Basil Charles Godfrey Place, was born on 1921-07-19, and isn’t mentioned on the travel documents, so presumably stayed in England. Did he stay at Berrystead? Did he attend Eversholt School? Did his sisters?

The King has been pleased to confirm the appointment of Major Charles Godfrey Morris Place, DSO, MC (Solicitor-General), to be a Nominated Official Member of the Legislative Council of Northern Rhodesia.

Northern Rhodesia was a British Protectorate [not sure what that means, despite Wikipedia] that is now called Zambia. The land is mineral-rich, and British companies wanted mineral rights. Deals were made with local chiefs and white British people moved in and assumed control. There was no elected parliament, just a legislative council, with some members appointed because they held other offices, some appointed specially (nominated official members) and some elected (unofficial members). Charles was appointed specially by the King, definitely a member of The Establishment. The legislative council made all the law.

There is a summary of colonial law for 1931, written by Charles Place, in the Journal of Comparative Legislation and International Law, volume 13, number 2 (1931), page 110, available at Jstor. It looks terribly white-privileged from a modern viewpoint. Here is a badly-OCR’d copy of this article, now out of copyright because Charles died more than 70 years ago:

Clearly, by this time, Charles had been appointed Solicitor-General of Northern Rhodesia, but just when isn’t known yet. The solicitor-general seems to be the second legal position in the country, behind the attorney-general.

Charles died at the age of 45. Here is the entry from the probate index:

That would be a reasonable house-sized inheritance nowadays, perhaps £700k.

I [EJW] at first thought that the Folkestone Hotel was just a stop on the way to or from Africa. But, it might be more. The London Gazette of 1934-03-09 contains an announcement:

Notice is hereby given that all creditors and other persons having any debts, claims or demands against the estate of George William Place, late of Holderness Hotel, Folkestone, Kent, formerly of Fern Cliff, East Cliff, Bournemouth, Hants, deceased (who died on the 18th day of January, 1934, and whose will was proved in the principal probate registry on the 27th day of February, 1934, by Westminster Bank Limited, 41, Lothbury, London, the sole executor therein named)…

and that led to this probate record:

The fact that Anna chose to bury Charles in Eversholt would suggest that Anna was still living at Berrystead.

Charles’s will was mentioned in the Times of 1932-04-28. This is the only mention of him there that I can find apart from a marriage notice.

It does seem a little odd that Charles’s appointment and demise as solicitor-general of Northern Rhodesia does not feature more online.

Anna died in 1949. Her death is recorded in the Totnes registration district.

[Apologies for not including more of the source documents, or links to them, in this article. Sometimes life just gets too complicated. EJW.]

[And more:
What caused Charle’s death at such an age?
And Anna’s too. She was 55.
Who are Peg and Pat, mentioned on the tomb?]

[ There may have been a family connection. Edward Aveling Green’s sister was Mary Hamilton Green, and Barbara Hamilton Place was born 4 years before Mary died. Mary’s probate record has her leaving over £9k. Some of that money came from shares in the Morris brewery of Ampthill. “Morris & Co. (Ampthill) Ltd, Ampthill Brewery, Bedford Street. Brewery in existence 1738. Financial stake in John Morris’ firm acquired by Thomas and George Green in 1858 but they continued as Morris & Co. Registered 1906. Acquired by J.W.Green Ltd. 1926 with 72 tied houses and closed.” from here. Edward Aveling Green died 1930 leaving £19k.]

[Eversholt school seems only to have records back to 1931. Pity!]