Charles Serle Lloyd was given a large chunk of land running from behind the Red Lion in Witts End to Higher Rads End, and then on towards Palmer’s Shrubs, according to the Enclosure Map.

Superannuations
Charles Serle Lloyd, First Clerk in the Comptroller’s Office, after a service of 28 years; being incapable of the efficient discharge of the duties of his situation, and this department having a clerk more than would be necessary under the new Regulations, and his Salary being £200 per annum:
per annum £100 – –

The same document describes some hair-raising chicanery as quite normal – someone being employed to do a government job; then that person arranging for someone else to stand in for him, at a fraction of the salary, while he stays at home and keeps the rest of the salary; then formalising this so that the government pays out the two parts of salary directly; then the regulation requiring his employment being abolished, so he really should be redundant, but only the deputy who actually does the job is fired, and the first chap goes on staying at home and getting his part of the deal; and this going on for decades; and then the government buys its way out by buying an annuity for the chap, because otherwise it would be “a hardship”! And this was normal!

The document Public Offices for the session 23 Jan 1821 to 11 Jul 1821 notes that Charles is still being paid his £100 per year superannuation.

Charles was involved with various Crooks (people whose name was “Crook”, of course. What else could I mean?) and Ebsworths in a chancery division court case in 1816 indexed here. The actual records are on parchment and the National Archive takes 3 days to find them!

A fine family history webpage tells of the government employment of Charles’s ancestors – it seems to have been a family tradition. There he’s spelt Charles Searle Lloyd. That says: 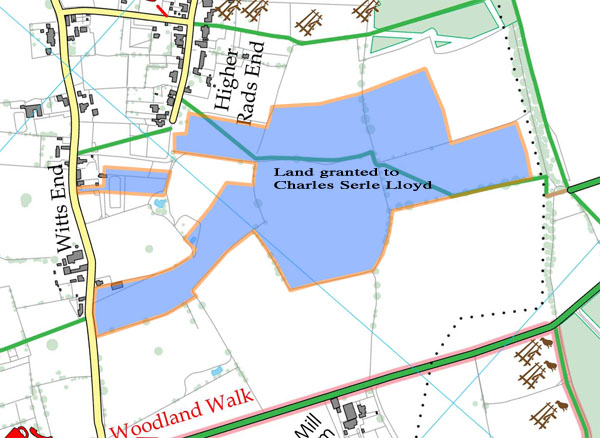 lands at Eversholt, Beds., which had been devised to her by Charles Searle Lloyd, then late of Islington, Middx, Gent, lawyer, as trustee to William Crook to hold for her daughter Mary Ebsworth.