Stephen Hastings was MP for mid Bedfordshire from 1960 to 1983. For at least some of that time, he lived in Eversholt, at the Old Rectory in Hills End (Thanks to Anna and Moira who provided that). Here is his wikipedia entry.

He was outspoken in defence of white rule in Rhodesia, which limited his political career. 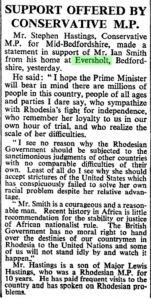