The great thunderstorm of 1918 is still spoken of in the village in 2010, although nobody remains who was there. It has passed into legend! The article reproduced below was found in a collection of papers lent by Anna Blomfield, and it’s not clear where it was published or who wrote it. However, it was written in 1918, so is highly likely to be out of copyright. A scan of the article is attached at the bottom. I (EJW) was told that it was this event which led to drainage holes being formed into the base of the Woburn Abbey wall around the recreation ground and at Froxfield, although I don’t know if that’s true. The recreation ground wall had not long been built when it was pushed down by the water, and had to be rebuilt.

The “Mr. Humphreys” referred to below must have been running Water End Farm.

A THUNDERSTORM of almost unparalleled severity, which must have received notice in the London newspapers but for the tremendous happenings of these days and the unusually small area over which [unreadable] fell upon us on the Friday before Whit-Sunday.
Fortunately for the country it was confined to something like a ten-mile radius, of which Ampthill would appear to be about the centre. It did not reach Luton or Sandy; and Woburn Sands, Crawley and Ridgmont were not affected by it: but here, in Eversholt, it will never be forgotten by those who witnessed it. Beginning at three o’clock in the afternoon, it raged continuously for over three hours, causing untold damage and loss to property, stock, and growing crops in field, orchard, allotment and garden, and in an incredibly short time converting the lower-lying parts of the village into lakes and rivers.
At Church End, the lakes to the right of the Milton road overflowed their banks, and a huge volume of water, dashing against the Park wall, brought down about 200 yards of it, inundating the Recreation Ground and hurling huge pieces of masonry and debris to the further side of it. Here it swept down the fences, and roared down Brook End, flooding Mr. Taylor’s downstair rooms to a depth of four feet, upturning every piece of furniture, and causing many breakages, and doing much the same to all the cottages down Brook End in its course. Meanwhile much the same havoc was being wrought at Froxfield, where the water from the higher ground in the Park behind, broke down the Froxfield garden walls, and poured through Mr. Slade’s and the adjoining garden, ploughing up the ground, and in some places literally carrying away the garden soil and altering the configuration of the field beyond. The water from this source followed the line of the ditch down the lower road, past the New Cottages, and on to Water End, where it joined forces with the floods from Church End.
It was here that perhaps the greatest damage was done.
Mr. Humphreys lost about a dozen sheep, a calf, and nearly 100 chickens and fowls. The water rose to a level of four or five feet in his pigsties and cowhouses, and it was with the greatest difficulty that the animals were got out and saved. The stackyard walls were brought down, and the remains of two haystacks were carried away wholesale by the water, and floated into the adjoining field. A cottage rented by Mrs. Gazely, at Rads End, was struck by lightning.
It is impossible at present to say how much damage has been done to the growing crops, but those fields that are on the slope, and were washed by the surging waters, suffered most. The hail, which was the size of marbles, and which fell for a considerable time, has left its mark on the battered and riddled vegetation, and has stripped off the fruit; whilst the gardens in the district look as though they had been upturned by bombs or hammered down by a heavy roller.
Those who stood by the Recreation Ground, after the worst was over, saw the lighter side of the storm. Carts and floats were ferrying belated workmen and women across the flooded Recreation Ground, whilst children were picking up fish which had escaped from the lakes above.
Printed by The Powage Press, Limited, Aspley Guise, Beds. 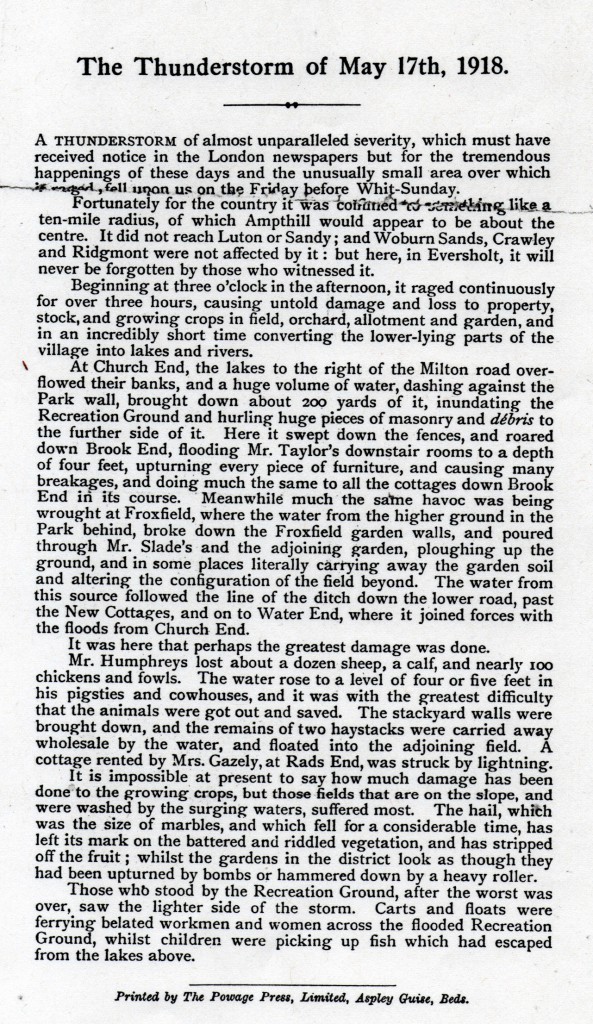