Ernest Frederick Fleckney had a narrow escape on 1932-05-11. Click the thumbnail for a bigger version, but there’s a transcript below.

From the Bedfordshire Times and Independent 1932-05-20 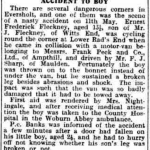 There are several dangerous corners in Eversholt, and one of them was the scene of a nasty accident on 11th May. Ernest Frederick Fleckney, aged 13½, son of Mr J Fleckney, of Witts End, was cycling round the corner at Lower Rad’s End when he came in collision with a motor-van belonging to Messrs Frank Peck and Co, Ltd, of Ampthill, and driven by Mr J Sharp, of Maulden. Fortunately the boy was thrown on to the bonnet instead of under the van, but he sustained a broken leg besides abrasions and shock. The impact was such that the van was so badly damaged that it had to be towed away.

First aid was rendered by Mrs Nightingale, and after receiving medical attention the boy was taken to the County Hospital in the Woburn Abbey ambulance.

PC banks was informed of the accident a few minutes after a door had fallen onto his little boy, aged 2½, and he had to hurry off not knowing whether his son’s leg was broken or not.