Click the thumbnail for a bigger version, but there is a transcription below. 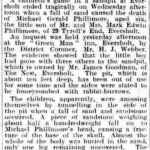 almost buried by a fall of sand

A children’s game in a sandpit at Eversholt ended tragically on Wednesday afternoon when a fall of sand caused the death of Michael Gerald Phillimore, 6, the little son of Mr and Mrs Mark Edwin Phillimore, of 29 Tyrells End, Eversholt.

An inquest was held yesterday afternoon at the “Green Man” inn, Eversholt, by the District Coroner, Mr HJ Webber. The evidence showed that the little boy had gone with three others to the sandpit, which is owned by Mr James Goodman, of The Nest, Eversholt. The pit, which is about ten feet deep, has been out of use for some time and the sides were stated to be honeycombed with rabbit burrows.

The children, apparently, were amusing themselves by tunneling in the side of the pit when a fall of sand and sandstone occurred. A piece of sandstone weighing about half a hundredweight fell onto Michael Phillimore’s head, causing a fracture of the base of the skull. Almost the whole of the body was buried in the sand, only one leg remaining uncovered. The terrified children ran off and told their companion’s father about the accident. Mr Phillimore enlisted the help of a neighbour, Mr A Goodman, who at once sent for PC banks. A doctor was also summoned, but when the land was extricated he was found to be dead.