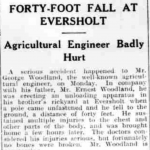 A serious accident happened to Mr George Woodland, the well-known agricultural engineer, on Monday. in company with his father, Mr Ernest Woodland, he was erecting an unloading apparatus in his brother’s rickyard at Eversholt when a pole came unfastened and he fell to the ground, a distance of 40 feet. He sustained multiple injuries to the chest and other parts of the body, and was brought home a few hours later. The doctors considered his injuries serious, but fortunately no bones were broken. Mr Woodland is progressing.