Reddings Hill is the steep downhill section with a right hand bend at the bottom, coming in to Potters End from Milton Bryan. It is still a hazard today, incautious vehicles occasionally demolishing the duke’s fence there. 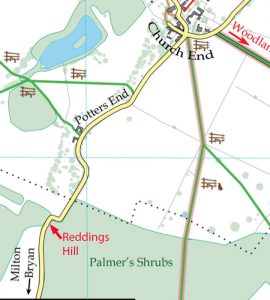 Click for a bigger copy, but there is a transcript below. 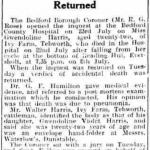 From the Bedfordshire Times and Independent of 1937-07-30

The Bedford Borough coroner (Mr RG Rose) opened the inquest at the Bedford County Hospital on 23rd July on Miss Gwendoline Harris, aged 22, of Ivy Farm, Tebworth, who died at the hospital on 22nd July after falling from her cycle at the bottom of Reading Hill, Eversholt, at 7:35 p.m. on 8th July.

When the inquest was resumed on Tuesday a verdict of accidental death was returned.

Dr G F Hamilton gave medical evidence, and referred to a post-mortem examination which he conducted. His opinion was that death was due to pneumonia.

Mr Walter Harris, Ivy Farm, Tebworth, cattleman, identified the body as that of his daughter, Gwendoline Violet Harris, and said she was 22 years of age and was an envelope hand-folder at Messrs Waterlow’s, Dunstable.

The coroner sat with a jury on Tuesday, and supt. Folkes was present on behalf of the County Police.

PC King described the scene of the accident, and Mr Eric Frederick Ludgate, farm labourer, Tebworth, who was riding with the girl, also gave evidence, in the course of which he said Miss Harris seemed to turn three somersaults.

A verdict was returned as stated.