Who, or why, or which, or what, is the Sportsman Inn?

This most enigmatic of Eversholt pubs is mentioned in Slater’s 1850 directory, which asserts that Richard Farmer runs it. 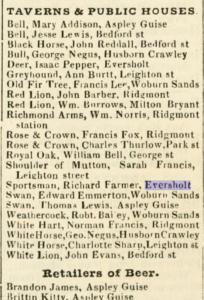 It seems it’s definitely a pub, not a beer house, or it would be listed under the “Retailers of Beer” category. Slater’s is not a complete list, indicating some laxity in its collection, so it may not be the most reliable guide.

According to the 1851 census (from Ancestry.com) Richard Farmer lives in Church End but calls himself a bricklayer. The house isn’t specified. 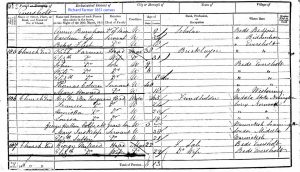 Richard likely died in 1854. John Farmer, Richard’s son born about 1842, is living in the Green Man in 1861 with his aunt, Ruth Smith, running the pub. Ruth was likely Richard Farmer’s sister, baptised in Eversholt Church in 1810.

The first mention of the Sportsman in Eversholt in the papers is in 1833, where there are two sources. However, the sources are contradictory. Click for bigger versions.

Here, for the search engines, are the transcriptions of these sad stories. A “Tom and Jerry”, according to the OED, is “Short for jerry-shop (a contraction, it is said, of Tom and Jerry n., from the cant name of a mixture of liquors): A low beer-house.”

George Fasey and Thomas Brown were indicted for a highway robbery at Eversholt.

William Spacey: On the 27th October last year I was at the Sportsman public house, at Eversholt. I went to the shops to buy some shop things; I went into the public house and had 2 pints of beer. I drank it all myself; afterwards I went to a Tom and Jerry house. I know the prisoners; they live at Eversholt, about a mile and a half from Milton Bryant, where I live. I did not see the prisoners at the Sportsman; my reckoning there came to 5d; I gave the landlady half a sovereign, and she gave me the change. Then I went to the “Tom and Jerry”; there I saw the prisoners; one of them was there when I went, and the other came after. I had 2 pints there; another man drank with me. I took my purse out to pay for the beer. I had 4s 6d more than the change I had taken; I counted the money when I was there, I had 14s 1d, the prisoners could see it; I had half a crown, a sixpence, and the rest were shillings; I stayed at the beer house till nearly eleven o’clock; I had to go to Milton Bryant; prisoners had been gone about ten minutes or a quarter of an hour; they knew where I lived. When I had got about a quarter of a mile, before I got to Potters Green, the prisoners came out of the hedge by the side of the road; the night was darkish; but am sure the men who came to me were the prisoners. Fasey knocked me down with his fist, and then fell upon me; he did not say anything, he laid himself across my legs. I felt Brown’s hand at my pocket; I could see him; he took my purse out of my pocket and all my money; they then both got up and ran away; during the whole at this time neither of them spoke to me; though it was not a light night, it was sufficiently light for me to see them, and I knew them very well.

Fasey asked the prosecutor how much beer he paid for the public house?

Prosecutor: I paid 2s for 6 quarts; eight of these fellows drank with me.

By the court: I don’t think I drank a pint of it myself. I was not quite sober, but not tipsy. I am a poor labouring man.

Elizabeth Spacey, wife of the prosecutor: my husband came home at half-past eleven o’clock the night of the robbery, and he was sober.

The prisoners being called upon for their defence, Fasey  said he had witnesses to prove he was not out at the time of the robbery. He called

James Fowler (a lad): I was along with Fasey from eight o’clock at at night till six o’clock in the morning. I never was away from him. I was with him at the public house till ten o’clock; we then went and laid in a stable till six o’clock next morning. I went to sleep, perhaps, about eleven o’clock. The stable is about three quarters of a mile from Potters Green.

Ann Brown: I live at Eversholt. I am a servant out of place. I lodged at this “Tom and Jerry”. I know the night Spacey was robbed. Three young men came in about eight o’clock, and staid till about half past ten; then Fazey and Fowler went out together. I was in the public taproom with the men.

Mr Baron Bolland commented on the evidence, and the jury found the prisoners guilty. Death recorded. His Lordship took occasion to condemn the manner in which these beer houses are conducted, as tending to encourage crime. Before the grand jury were discharged, they made a presentment on the evils of beer houses.

George Fasey, aged 20, and Thomas Brown, aged 18, were indicted for assaulting William Spacey, on the King’s Highway, and stealing from his person 14s.

The prosecutor lives at Milton Bryant. On the 27th of last October, he went to a shop, to buy some chandlery goods. Afterwards went into the Sportsman beer shop there, where he met the two prisoners whom he had known for many years. They drank with him as well as some other men who were there, and at a little before eleven o’clock at night, after paying for six quarts of beer, he left the house. The two prisoners new where he lived, and quitted the house before him. On his reaching Potter’s Green they came out of the hedge by the side of the lane. Fasey knocked him down with his fist, and fell upon him. Brown the other prisoner laid himself across his legs. While down, prosecutor felt Brown’s hand in his pocket, and saw him take a purse containing 14 shillings in silver. Both prisoners then got up and ran away in the direction of Eversholt. Neither of the prisoners spoke. Prosecutor saw them while on him. He knew them well.

Cross examined: is a poor labouring man. Was not quite sober, or very drunk.

On behalf of the prisoners a lad named Fowler was called with a view to prove an alibi. He said he left the beer shop in company with the prisoners, and slept in a shed with them all night. Went to sleep at eleven o’clock.

These two accounts contradict each other in multiple details. In particular, the second suggests the Sportsman is a beer shop, while the first labels it a pub. Of the two, the first seems more credible, containing direct speech and much more information.

There are Bedford Gaol records for George Fasey and Thomas Brown. George had already been in jail for poaching. Those records say that George was 27, as opposed to the Bucks Gazette saying he was 20, but, don’t believe everything you read in the papers. Their sentences were commuted to transportation for life. Both convicts were sent to the hulk prison ship Justitia at Woolwich on 19 May 1833. Thomas Brown was quickly sent on. He left England on the Lord Lyndoch on 30 May 1833, and arrived in New South Wales on 18 October 1833. There is a wealth of information about these convict ships online, including the medical records of this particular voyage and a complete list of arriving convicts, but George Fasey isn’t there, under any conceivable spelling of his name. There was a Thomas Fasey, presumably a relation, sent to Bedford Gaol and transported for life for stealing a lamb, but I haven’t found George.

However, none of that fascinating stuff really pins down the Sportsman Pub.

There are no further mentions of the Sportsman in the British Newspaper Archive for many years, until just one turns up in 1869. 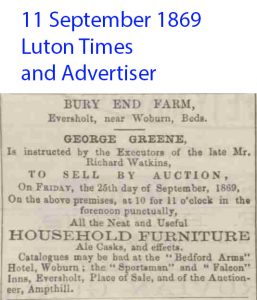 That seems quite definite about the name and location of the pub. Auction catalogues were generally placed only in the larger pubs – the Green Man and the Falcon feature regularly.

It’s really hard to change a pub name – locals persist in calling it by the old name for years. How many of us called the “Saffron Plaza” the “Drovers Arms” when they tried to change the name? Eventually they gave up and cahnged the name back to Drovers Arms.

The Green Man was rebuilt in 1835 – the present building has that date in its gable. Maybe the new management tried to give it a new name with the new building. And tried and tried, and then gave up. But, that wouldn’t explain why it would be called the Sportsman in 1832 or 1833.