Skip to content
Linden was the grand house which stood on the ground where Eversholt cricket pitch now is.
How did a grand house turn into a cricket pitch? Read on!
Reproduced below is an article I wrote for About Eversholt in March 2010.
I made some mistakes in the longer article attached at the bottom of the page, and I need to revisit it to provide some corrections – but not yet! In particular, Lucy Monoux left Linden to Charlotte Smart in her will. I’ve attached transcriptions of Philip Monoux’s will, which leaves Linden to Lucy, and Lucy’s will, which leaves Linden to Charlotte. William Lynn Smart probably never owned Linden – it was Charlotte’s property. William and Charlotte’s wills are attached. If Linden was part of William’s estate, he directed it to be sold after Charlotte’s death, and the cash split many ways. If it was part of Charlotte’s estate, she left it to Henry de Berniere Smart, a nephew of William.
– Emrys Williams

On 18th march 2010, I gave a talk, for Triple Friendship and others, at
the village hall. I spoke about Linden, the grand house that once stood
on the cricket pitch. This subject was quite an obsession of mine for a
while, but I wrote it down and got it out of my system. The most
fascinating part, I find, is how Linden has dropped from the village’s
memory. For more than a century, Linden was the grandest house in the
village, occupied by the grandest people, right at our centre. Yet,
nowadays, few people even know its name.

I tracked down quite a bit of information online, and did some talking
and walking around to find more. Linden stood between the cricket square
and the pond. Walk out of the front door and you’d be on the square.
Walk out of the back and you’d face Tyrells End. Linden was perhaps
twice the size of the largest house in the village today. Linden lodge,
still existing, guarded the entrance, and the white gate beside Linden
Lodge was Linden’s driveway. The drive led through the garden to the
house, and eventually came out in Potters End.

The Linden estate included all the land where the school stands, and
School House, and what is now the End House, which was once Linden Farm.
The farmlands stretched over the road to Palmer’s Shrubs and back
towards Woburn Abbey.

Linden was destroyed by the 9th Duke, Francis Russell, around 1886. He
bought the estate and had the house razed to the ground. This seems to
have been a habit. He did the same thing at Battlesden, with an even
grander house, and also, I am told, at Husborne Crawley. Not many years
later, the land was granted to the village for the recreation ground.

The tale of Linden that I’ve discovered so far is quite involved, and
too long for About Eversholt, but there is a version online for those
interested at [see the attachment at the bottom of this page]. 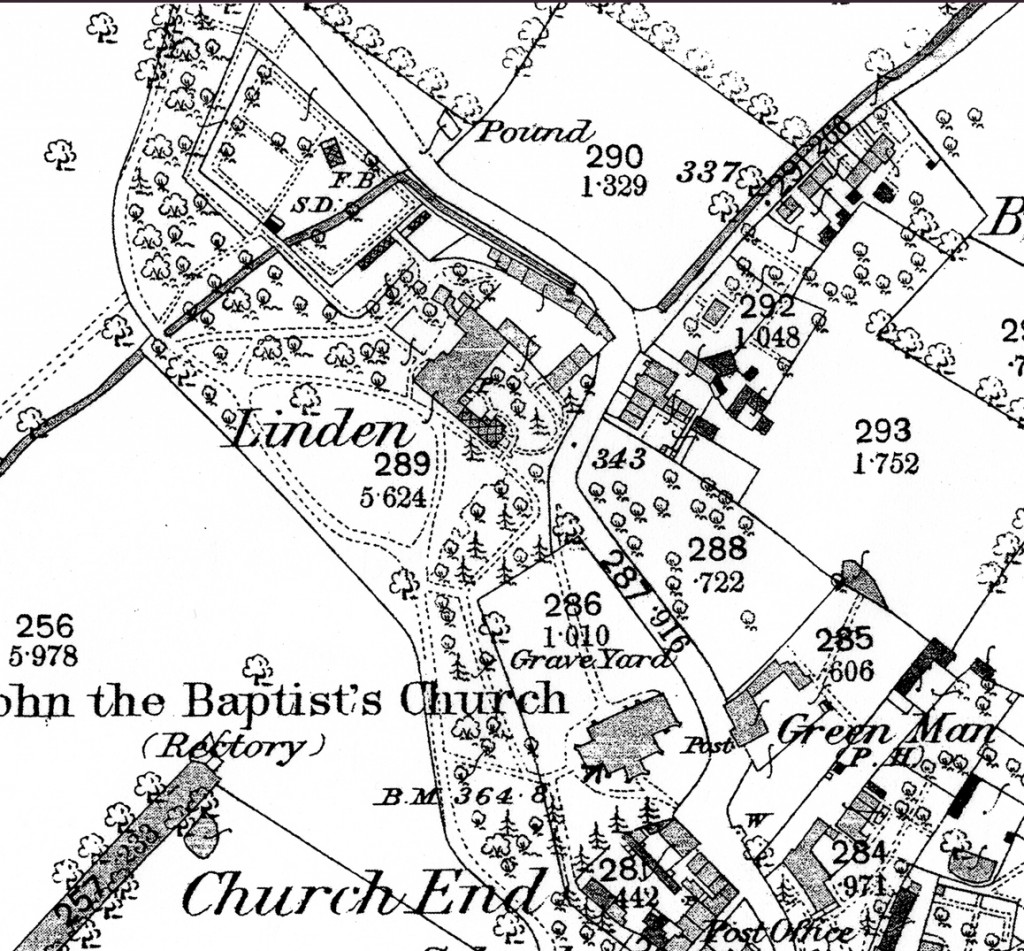 The map reproduced here is from 1881, and shows Linden in all its
finery. Enter the grounds at Linden Lodge, just off the top of the map,
and follow the driveway round through the tennis courts and over the
brook to the front of the house. There’s a large stableyard behind the
house to take care of your horses, with all sorts of staff living there.
You can drive on through the Linden grounds past the church (in what is
now the churchyard) and out across Linden land to Potters End.At the talk on march 18th, I said that I’d found no picture of Linden.
However, in the last few days, the marvellous Google Books has turned up
a reference in an obscure privately-published family history from 1868,
and it has a picture, reproduced here. Thank you, Google! The picture is
drawn as if standing where Linden Lake now sits, still on Linden estate
property, looking towards the cricket pitch, to see the front door of
the main house. To the right of the house is the conservatory, which
alone is about the same size as the village hall today. The house is
bigger than it looks, because it stretches way back towards Tyrells End.
The pond on the right is part of the Linden great fishpond, built by
hand long ago. The lime trees – Lindens – forming an avenue around the
pond are still there today. On the far left of the picture is Linden
Lodge, and the driveway can just be seen curving round to the front of
the house. 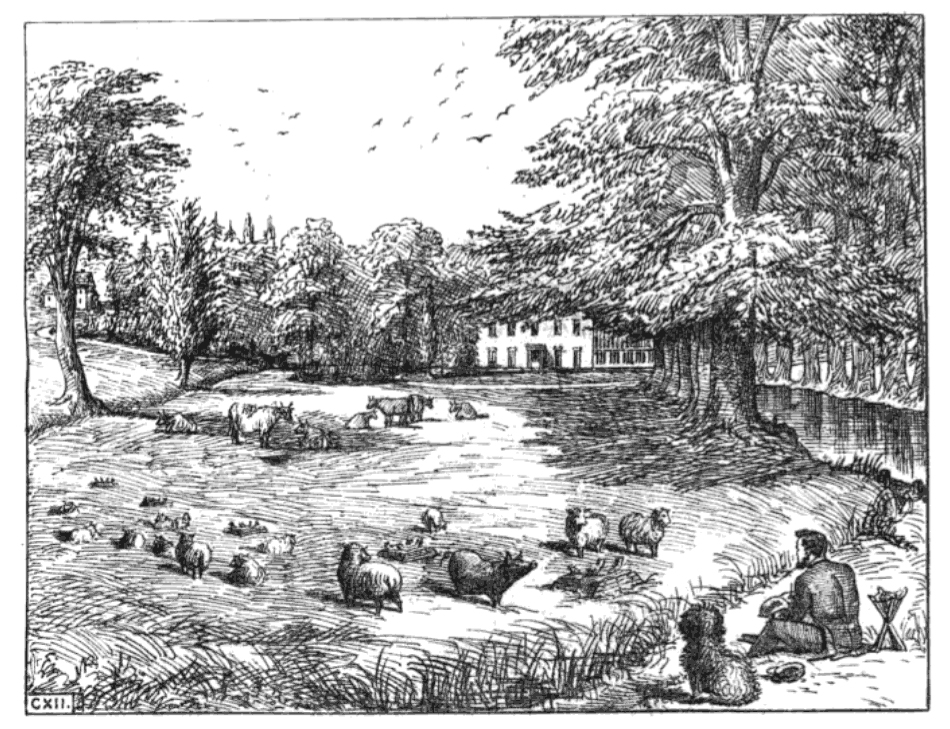 I’ll continue to update my Linden history as I discover more. If anyone
knows more about Linden or the people that lived there, or would like a
printed copy of my online history, or would like to collaborate in
research, please let me know on 280146, or leave a comment below.

Here is the full pdf article with most of the house hisotry in it. I must move this to HTML! Click to view.
linden4a – 9Mbyte pdf document