Anne Amelia Cleeve isn’t a well known Eversholt name and may have no connection with the village, but she’s still fascinating.

Anne Amelia Cleeve has a lovely memorial in the churchyard. It’s the odd-looking pillar near the cricket pavilion, unique and distinctive. Click for a bigger version. 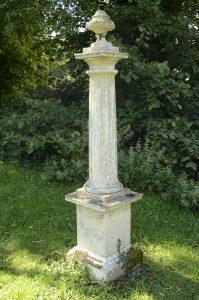 Sacred to the memory of
ANNE AMELIA CLEEVE
who died
May 13th 1826
The last tribute of affection of all who knew her [and] loved her.

The last line of that was illegible to Barbara Miles in 1996, but was recorded in 1913 by Arthur Weight-Matthews. It’s a secular memorial, no religion in either the inscription or the design of the monument, which is unusual for the time. The position of the monument is also slightly odd. Adjacent graves are from 1840 or later. When the grave was dug, it was in an otherwise unoccupied area, as far from the church as possible. Was this influenced by its secular nature?

FindMyPast has a record from the “National Burial Index” which says that “Ann Emilia Cleeve” was buried in Eversholt in 1826 and that she was born in 1796. (There may be more, haven’t seen the actual record.) So she was 30 when she died, just 24 when she made her will.

We have Anne’s will, from Ancestry.com via Venetia Barrington. Thank you, Venetia. Here’s a transcript, in which you can blame any errors on Emrys Williams:

This is the last will and testament of me Anne Amelia Cleeve of Shooters Hill in the County of Kent Spinster. First I nominate constitute and appoint my Brother William Cleeve and my Brother in Law John Edwards Executors of this my will and I do hereby give and bequeath unto my said Executors all my funded property upon trust to be disposed of as I shall hereafter mention as soon as all my just debts funeral and testamentary charges are discharged which I shall owe at the time of my decease. I do hereby give and bequeath to my Brother William Cleeve my Sister Maria Cleeve and my Brother Charles Cleeve the whole of my funded property equally to be divided between them part and share alike except one hundred pounds to my dear Sister Charlotte Edwards which I bequeath her as a mark of my affection. I give and bequeath to my Sister Emily Edwards my gold watch and seal. I nominate constitute and appoint my Sister Maria Cleeve my Residuary legatee. Lastly I hereby declare this to be my last will and testament to which I set my hand & affix my seal this twelfth day of November in the year of our lord one thousand eight hundred and twenty Ann Amelia Cleeve Signed sealed published and declared by me Anne Amelia Cleeve the testator as and for my last will and testament in the presence of Anthy Hy Thomas – Clerk. Mary Lawson – Witnesses.

Proved at London 22nd August 1826 before the worshipful Henry Vanne Salusbury Doctor of Laws & Surrogate by the oath of William Cleeve Esqr. the Brother the surviving Executor to whom admon was granted being first sworn duly to administer.

There’s no mention of God in the will, either, which is not unusual but is consistent with the secular memorial.

Shooter’s Hill is now in London for administrative purposes but back in 1820 it was in Kent.

Anne was a spinster, so Cleeve was her birth family name. She uses the less common version of her given name. Less than 10% of the Anns in Eversholt before 1900 used the “Anne” spelling.

By 1826, John Edwards had died, because William Cleeve is the “surviving executor”.

The “funded property” is, I think, deposits in stock. The residuary legatee, Maria, would get anything that wasn’t of that nature – cash, jewels etc. I think.

So, Anne is very well off. She makes a minor bequest of £100 with the implication that the rest is much greater. That was a lot of money in 1820, even £100 would have bought a house. The best guess would be that she inherited wealth from her parents, and her siblings would have done so too.

Considering the detail we have of her wealthy family, it is surprising that it’s hard to find the Cleeves online. There are many Cleeves with various spellings at Ancestry and FindMyPast, Clieve, Cleve, Cleave, Cleaves, …, but working out who is related is not clear.

There were Cleeves around Shooter’s Hill in 1835. The poll book contains two in Plumstead, a stone’s throw away.

There was a mildly famous Cleeve nearby in Kent. Bourchier Cleeve, 1715-1760, “pewterer and writer on finance” according to the Dictionary of National Biography. He gained enough wealth to buy an estate in Foots Cray and erect a Palladian mansion, Foots Cray Place. Whether Anne Amelia is related is pure guesswork at the moment. Foots Cray is another Stone’s throw from Shooter’s Hill.

There was a Cleeve living in Eversholt in 1827. The Northampton Mercury of 1827-08-18 reported “Mrs Cleeve” of Eversholt to have subscribed two guineas for the Bedford Infirmary, in a short list of other worthies. This must have been the wife of a male Cleeve – William or Charles? So perhaps one of them was living in Eversholt.

The burial register remains to be examined. It’s always possible the memorial is just that, and there was no burial.

Maybe I have the Cleeve relationships mixed up. Ancestry.com says that a Charlotte Cleeve married a John Edwards on 1808-10-20, in Bromley, Kent. That’s about two throws of a stone from Shooter’s Hill. We still don’t know if these people are related.

Know anything about the Cleeves? Any of them? Leave a message!