Peter Barr died at Wakes End Farm on 1930-10-19. Click the thumbnail to see a bigger image, but there is a transcript of the article below. 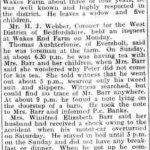 Found shot in one of his barns

Following a motor accident near Leighton Buzzard late on Saturday night, Mr Peter Barr, 44, farmer, of Wake’s Farm, Eversholt, was on Sunday evening found shot in one of his barns. Mr Barr’s car ran into a ditch, and he was taken home suffering from a bruise on the forehead and a slight cut on the nose. The next day he was about the farm as usual, and nothing had occurred to suggest that he intended to take his life. Though Mr Barr had only been at the Wakes Farm about three or four years, he was well-known and highly respected in the district. He leaves a widow and five children.
Mr HJ Webber, coroner for the West District of Bedfordshire, held an inquest at Wakes End farm on Monday.
Thomas Aushterlonie, of Eversholt, said he was foreman at the farm. On Sunday, at about 6:30 p.m. he was having tea with Mrs Barr and her children, when Mrs Barr said she wondered why Peter did not come for his tea. She told witness that he went out about 5 p.m. wearing only his tweed suit and slippers. Witness searched, but could find no trace of Mr Barr anywhere. At about 9 p.m. he found a note lying on the doorstep of a barn. He took the note to Mrs Barr and informed PC Banks.
Mrs Winifred Elizabeth Barr said her husband had received a shock owing to the accident when his motor car overturned on Saturday. He stayed in bed until 3 p.m. on the Sunday and did not have any breakfast or dinner. When he got up he complained about his head, and kept pacing the bedroom.
Dr WL Garner, of Ampthill, said he was called to the farm and was shown the body of deceased. Death had taken place an hour or two previously. In his opinion death was due to the effect of a gunshot wound, which was self-inflicted.
PC Banks, of Eversholt, said that when he visited the barn deceased was lying on the floor with a double barrel shotgun lying across his right thigh. In his opinion Mr Barr put the barrel in his mouth and blew off the top of his head. Mr Barr was born at Kilbaxhan [Kilbarchan?], Renfrew, and came to Eversholt in October 1927. He had business troubles.
The coroner returned a verdict of suicide whilst temporarily of unsound mind.

Peter and Winifred Barr are buried in one grave in Eversholt churchyard. They share it with Pat, presumably their son, and Mary Barr.