From The Bedfordshire Times and Independent of 1933-08-25. Click for a bigger version, but a transcript is below. 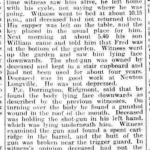 An inquest was held at Eversholt on Monday by Mr HJ Webber (Coroner for the West District of Bedfordshire) on Frederick Francis Percy Smith, 75 Water End, Eversholt, farm Labour, who was found shot that morning. Deceased was 21 years of age and was a single man.

The coroner sat with a Jury, of which Mr HJ Humphreys was foreman.

Mister William Henry Smith, of 75 Water End, Eversholt, roadman, said that deceased was his brother. On Monday, at about 5:40 AM, he went up the garden path and saw his brother lying face downwards. Witness called to him but got no reply. Witness went to him and saw blood on the top of his right ear. Witness then fetched his father, who said, “He has shot himself. There is the gun.” The police were then informed. Deceased must have come into the house to get the gun. He usually slept with witness, but he did not notice his not coming in. He generally came in about 10 PM. Deceased had apparently brought his cycle home on Sunday night, and put it up all right. He was always cheerful, and did not drink.

Mr Henry Smith, of 75 Water End, Eversholt, farm Labour, said that on Sunday at about 6 PM he saw his son in the back garden. He was then laughing and joking. He had eaten his meals and seemed to be in his usual health and spirits during the day. He made no remark about doing away with himself. At about 6:15 PM, the last time witness saw him alive, he left home with the cycle, not saying where you was going. Witness went to bed at about 10:15 PM, and deceased had not returned then. His supper was left on the table, and the key placed in the usual place for him. Next morning at about 5:40 his son William came and told him that Fred was at the bottom the garden. Witness went up the garden and saw him lying face downwards. The shot gun was owned by deceased and kept in a stair cupboard and had not been used for about four years. Deceased was in good working at Newton Longville. He was not depressed.

PC Darlington, Ridgmont, said that he found the body lying face downwards as described by the previous witnesses.On turning over the body he found a gunshot wound in the roof of the mouth. Deceased was holding the shot gun in his left hand, which was lying underneath him. Witness examined again the gun and found a spent cartridge in the barrel, and the butt of the gun was broken near the trigger guard. In witness’s opinion, deceased had put the muzzle of the shot gun into his mouth and fired and fell onto the gun.

Dr Warren A Barnes, of Woburn, said that he was of the opinion that deceased had committed suicide by putting the gun in his mouth and that he broke the stock by falling forward on his face.

Mrs Nelly Mary Mallett, of 7 Margate Road, Brixton, London, a laundry hand, said that she was deceased’s cousin. On Sunday about 3:30 PM she went for walk with deceased. They went towards Froxfield gate, and then walked back to a field and sat down. Deceased was talking and laughing all the time. He talked about football, and made arrangements to take her out for the week. He also promised to meet her at 8 PM at his home that evening. Before he left home at about 6 o’clock that evening he said to witness, “I shall not be long and I shall take you out at 8 o’clock.” He said nothing to witness about ending his life.

Supt. Woods said that the on the Sunday evening at about 10 o’clock he was in his car and his headlights showed a man and a woman. He had a good look at them but they were unknown to him. On looking at the photographs produced he was quite certain that they were the respective photographs of the man and the woman he saw. They appeared to be going in same direction as he was. They were hesitating apparently for a moment as to which way they should go. They seemed as if they were just parting.

Miss Mallett (recalled) said that there was another young lady in it. There had been a difference of opinion about another girl.

The jury returned a verdict that deceased committed suicide whilst temporarily of unsound mind. They expressed sympathy with the bereaved family, with which expression the coroner associated himself.