[ This story was published in many local papers at the time. There is a short article in the BedforshireTimes and Independent 1936-02-28 that should be added here. ]

Click the thumbnail for a bigger version, but there is a transcription below. 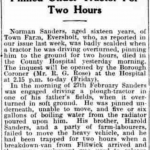 Pinned under tractor for 2-hours

Norman Sanders, age sixteen years, of Town Farm, Eversholt, who, as reported in our issue last week, was badly scalded when a tractor he was driving overturned, pinning him to the ground for two hours, died in the County Hospital yesterday morning. The inquest will be opened by the borough coroner (Mr RG Rose) at the hospital at 2:15 p.m. today (Friday).

In the morning of 27th February Sanders was engaged driving a plough tractor in one of his father’s Fields, when it overturned in soft ground. He was pinned underneath, unable to move, and five or six gallons of boiling water from the radiator poured upon him. His brother, Harold Sanders, and a party of farm labourers, failed to move the heavy vehicle, and he had been trapped for two hours when a breakdown van from Flitwick arrived and the crane equipment was used to release him. He was extricated in a serious condition. Dr Barnes, of Woburn, rendered first aid, and the boy was taken to hospital in the Leighton Buzzard ambulance.

Soon after his admission to the hospital an operation was performed, but his condition did not improve. 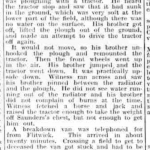 How a badly injured Eversholt lad was pin for two-and-a-half hours under an overturned agricultural tractor was revealed when the Borough Coroner (Mr RG Rose) resumed the inquest at the Central Police Station on Wednesday on Norman David Saunders, aged eighteen, of Town Farm, Eversholt. Saunders was badly scalded on 27th February when the tractor he was driving overturned while he was ploughing one of his father’s fields. He was pinned under the machine and boiling water from the radiator poured over him. A breakdown crane was fetched to release him.

At the opening of the inquest of the County Hospital on 6th March Dr MA Heil, house surgeon, said that Saunders suffered from severe scalding and this caused his death. A blood transfusion operation was performed.

At the resumed inquest Mr Harold Saunders, of Town Farm, Eversholt, said he worked on the farm with deceased, who was his brother. On 27th February at about 10:30 a.m., witness was picking brussels in the same field that his brother was ploughing with a tractor. He heard the tractor stop and saw that it had sunk in the ground, which was very soft at the lower part of the field, although there was no water on the surface. His brother got off, lifted the plough out of the ground, and made an attempt to drive the tractor off again.

A breakdown van was telephoned for from Flitwick. This arrived in about twenty minutes. Crossing a field to get to deceased the van got stuck and had to be pulled out with horses. Eventually they managed to lift the tractor and remove his brother after he had been pinned down for two-and-a-half hours. Later he saw that water had been running out of the radiator over deceased.

PC banks, of Eversholt, said that the cause of the accident was that owing to the softness of the ground the back wheels of the tractor stuck and the front wheels reared up.

The coroner recorded a verdict of accidental death and sympathised with the father. “It was a very terrible mode of death,” added Mr Rose. He also expressed the opinion that everything possible was done and that there was no blame attached to anyone.

Norman David Saunders has a monument in Eversholt Churchyard.