Lily French died following an accident on 1944-08-06 cycling down Reddings Hill. She was the second cyclist to have a fatal accident there.

Click the thumbnails for bigger versions, but there is a transcript beneath each report. 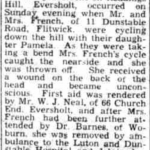 A nasty accident on Reddings Hill, Eversholt, occurred on Sunday evening when Mr and Mrs French, of 11 Dunstable Road, Flitwick, were cycling down the hill with their daughter Pamela. As they were taking a bend Mrs French’s cycle caught the nearside and she was thrown off. She received a wound on the back of the head and became unconscious. First aid was rendered by MR WJ Neal, of 66 Church End, Eversholt, and after Mrs French had been further attended by Dr Barnes, of Woburn, she was removed by ambulance to the Luton and Dunstable Hospital and detained. 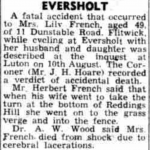 A fatal accident that occurred to Mrs Lily French, aged 49, of 11 Dunstable Road, Flitwick, while cycling at Eversholt with her husband and daughter was described at hte inquest at Luton on 10th August. The Coroner (Mr HJ Hoare) recorded a verdict of accidental death.

Mr Herbert French said that when his wife went to take the turn at the bottom of Reddings Hill she went on to the grass verge and into the fence.