Bernard William Middleton was from Froxfield, although at the time of his death he was lodging in Stow-on-the-Wold. He died some time before 1960-08-19 in a motorbike accident.

Click for a bigger version, but there is a transcript below. 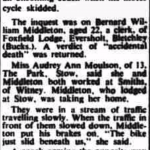 From The Tewkesbury Register, and Agricultural Gazette of 1960-08-19.

A girl from Stow-on-the-Wold told a Coroners’ court at Oxford on Wednesday how the driver of a motorcycle on which she was riding pillion was thrown into the path of an oncoming coach when the motorcycle skidded.

The inquest was on Bernard William Middleton, aged 22, a clerk, of Foxfield Lodge, Eversholt, Bletchley (Bucks). A verdict of “accidental death” was returned.

Miss Audrey Ann Moulson, of 13, The Park, Stow, said she and Middleton both worked at Smiths, of Whitney. Middleton, who lodged at Stow, was taking her home.

They were in a stream of traffic travelling slowly. When the traffic in front of them slowed down, Middleton put his brakes on. “The bike just slid beneath us,” she said.

A coach coming the opposite way took Middleton along and then she saw him go underneath a tyre.

Mr Frederick Pratley, of Chadlington (Oxon), a passenger in a car following behind, said: “I saw the motorcyclist on the crown of the road. All at once it went from underneath him and he came down flat on the road and rolled into the path of an oncoming coach. The road was wet.”

The Coroner, Mr T D Gardiner, said Middleton had done nothing a normal motorcyclist would not do. It was simply unfortunate that he had been on this particular piece of road in those conditions.

There is a monument to Bernard at his grave in Eversholt Churchyard.