Where in Eversholt did John Bolding live?

We don’t know yet. But we do know where he is now. 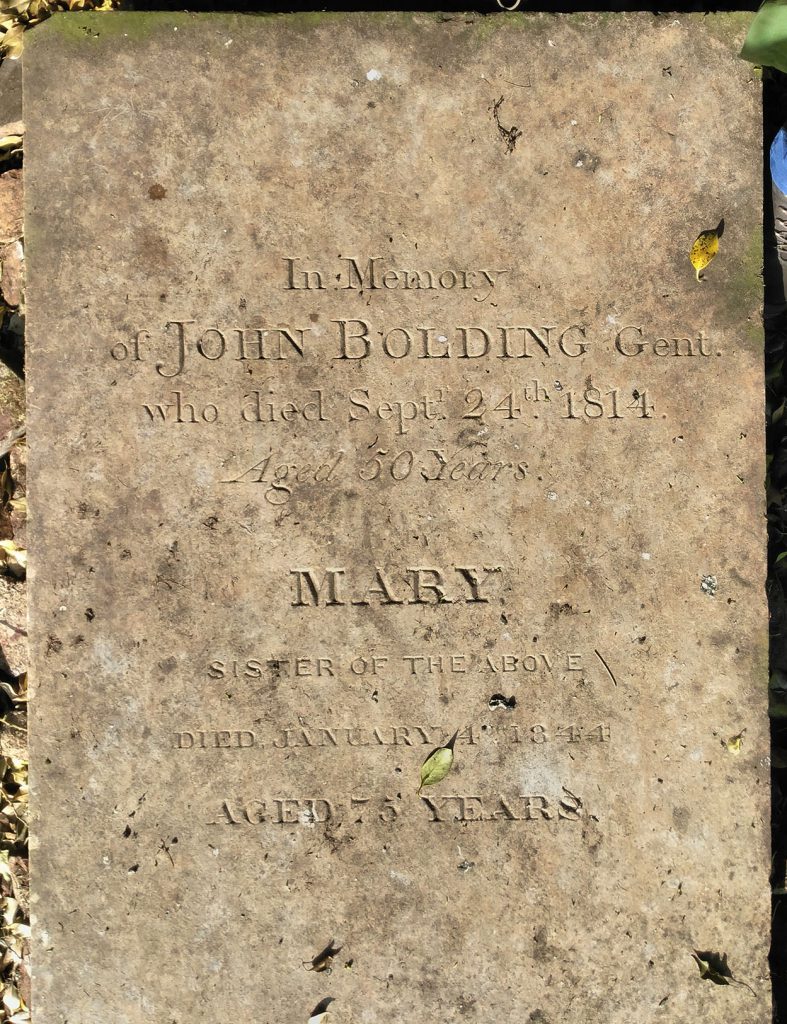 John Bolding is buried in Eversholt churchyard, under this enormous slab of beautifully-engraved stone.

Barbara Miles catalogued this inscription around 2000, and noted that the slab was the cover of a raised tomb that had collapsed. She found a photo of the tomb still standing, and here it is. (Click for a big version.) 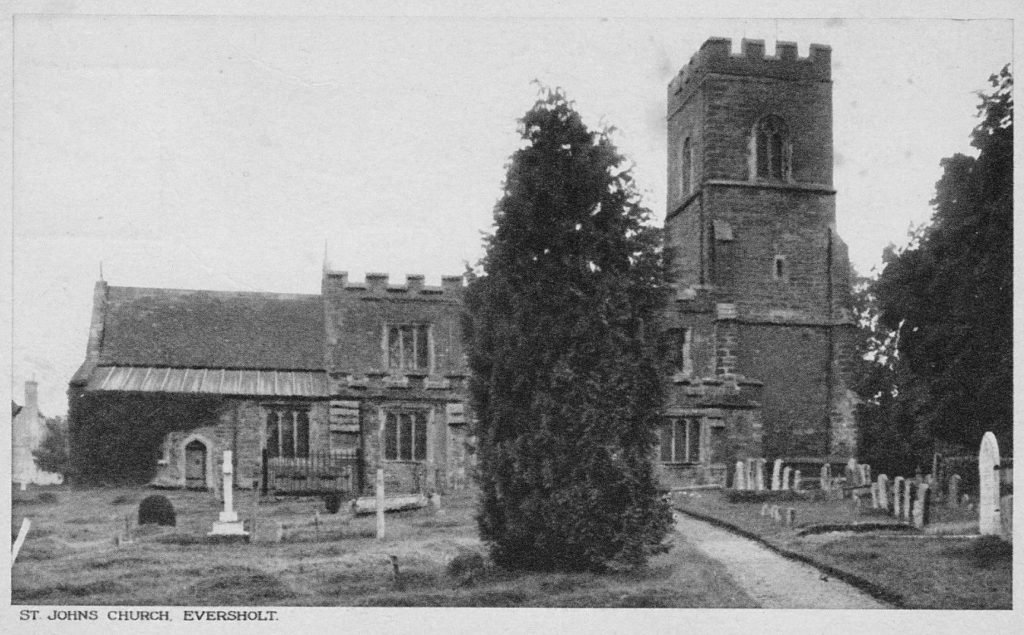 The Bolding tomb is the one surrounded by railings, quite the grandest tomb in the churchyard. The above image was made a little after 1913, judging by the tombstones visible. Sometime in 1914-18, the church railings were taken for the war effort, and it seems likely that this is also when the tomb railings were taken too. They’ve certainly gone now, and the supporting kerb stones are scattered round the memorial slab, with rubble from the collapse. It’s possible that the iron of the railings was holding everything together, and removing the railings caused the kerb stones to spread out, which caused the walls of the structure to collapse, which left the top slab lying in the rubble as it is today. A sad end for a grand grave, particularly if iron salvage efforts in wartime are of more propaganda use than practical.

The slab that remains, fortuantely intact, weighs something over 600kg, and would have taken a dozen men to lift. John Bolding must have been wealthy.

Venetia Barrington turned up some of his story (Thanks!) from Ancestry.

John Bolding was born in Ampthill in 1764, son of John and Ann Bolding. He was apprenticed as a surgeon and apothecary, definitely an upper-class sort of apprentice.

Venetia very kindly provided a copy of John Bolding’s will. I (EJW) am not sure of the copyright status of that document, so here is just a transcription, produced by the standard method of microscopy, graphological analysis, prayer and divination by means of entrails and burnt printouts of the fourth-generation reproduction of the Georgian clerk’s spidery handwriting. All punctuation marks, and errors, are the responsibility of EJW.

Proved at London 20th October 1814 before the worshipful Samuel Pearce Parson, doctor of laws and surrogate, by the oath of Elizabeth Bolding, widow, the relict and sole executrix, to whom admon was granted, having been first sworn duly to administer.

From The Morning Chronicle, 28 July 1815. A collection in the parish of
Eversholt, organised by G. Wynter, raised £19 1s 5d for the Waterloo
Subscription, which gave money, presumably, to veterans of the battle of Waterloo.

So John Bolding was definitely wealthy. He owned real estate in North Crawley and Flitwick, let out. He financed a mortgage on another property, and had income from it. He had at least £2300 invested in stocks and securities. He could afford a decent tomb.

But, where did he, and his substantial family, live? It wasn’t what was then Eversholt House, where the Sandys family lived. It wasn’t the great house Linden on the recreation ground, where Lucy Monoux lived. There isn’t a record of him in Church Farm or what is now School House, but it’s not inconceivable he lived there. Anywhere else? Any good ideas?

Venetia suggests the family moved away from Eversholt after John died in 1814. It’s notable that Elizabeth, John’s widow, wasn’t returned to Eversholt for burial, yet his sister, Mary was. Maybe Mary carried on living here?

Please let us know if you know any more about the Boldings!