There is much folklore about Eversholt pubs, and some misconceptions. Some published records seem to contain mistakes. This page and those for the individual pubs are an attempt to penetrate the thickets of misinformation. This page is just an overview describing sources, while the individual pub pages go into more detail.

The sources for these pages here are

Here is a version of the Parish path Map annotated with the position of some of the pubs. Exactly which house was The Pheasant isn’t clear, but it is one of the buildings in the plot marked. Click for a much bigger version. 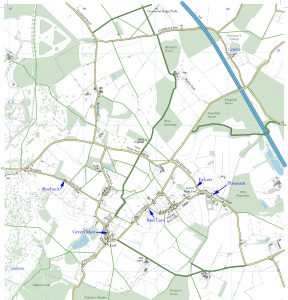 Richard Ireland and Wendy Featherstone, in their splendid Odds and Ends book about the village, give this list: 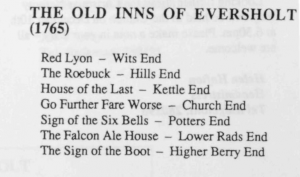 We already have the sources for these lists here. The 1765 document has to be the Field-Book associated with the 1765 map. And the Directories are mostly available here too.

Odds and Ends alleges that there was a pub named The Swan listed in the 1910 Kelly’s Directory. I have to say I can’t see a Swan at all anywhere in that listing, so I think this is imaginary, I’m afraid.

There is quite a bit of confusion about these various lists, so it is worth trying to correct some misunderstandings.

Looking at the Field Book for the 1765 map, which says who owns what, these (alleged) pubs are listed:

In this table, the “section” and “No” columns refer to the index numbers marked on the 1765 map. “ARP” are the land area in acres, rods and perches. It’s not clear where the “owner 1795” data comes from.

Only two of these are unequivocally listed as pubs, the Falcon and the “Go Further and Fare Worse”. The others, although they have signs traditionally associated with pubs, are not really clear. Even one of those had “formerly sign of the Last” so may have ceased to be a pub in 1765, if it was one earlier.

For more details on all of these, please see the subpages.